Groovy Christmas' Past: Batman, Green Arrow, Black Canary, and more in "Battle of the Thinking Machines" 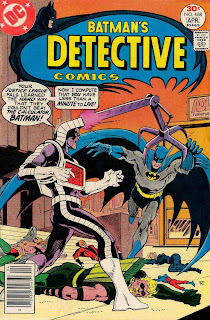 This week Ol' Groove is presenting only the best of the best comics published during the Christmas Seasons of the Groovy Age. The stories are not all Christmas or holiday themed, but they came out in December, and are all top-notch comics I bought either on Christmas Eve or Christmas Day (sort of a tradition, you might say). First up, Detective Comics #468's (December, 1976)"Battle of the Thinking Machines".

I love this comic! I mean, it's the full-fledged debut of art-team supreme Marshall Rogers and Terry Austin, man! They return with writer Steve Englehart a couple issues later for their legendary "Dark Detective" run (issues 471-476), but this is their oft-forgotten Batman premiere. Rogers and Austin had been providing the art (issues 466-467) for an innovative back-up series by writer Bob Rozakis in which a variety of heroes (Green Arrow, Black Canary, Hawkman, Elongated Man, and the Atom) each battled an oddball villain called the Calculator (Rozakis' creation). The stories all tied together and lead to those heroes teaming with Batman in this issue's grand finale. It's a really a blast. The kind of story you, sadly, don't see anymore in the regular Batman titles. Get ready to read seventeen pages of heaven featuring the real Batman, baby!

Posted by The Groovy Agent at 8:55 AM