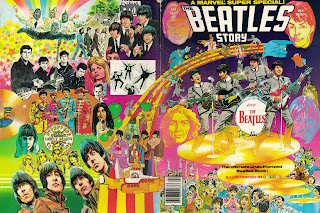 Thanks to Beatles: Rock Band (did'ja catch the VH-1 special?), Beatlemania is in full bloom again. When Ol' Groove sat down to figure out how to celebrate our 500th post, I asked myself, "What could I rap about that would capture the Spirit of the Groovy Age?" Rock and roll and comics. Members of both genres seem to be huge fans of each other. And who was ever bigger, more iconic than the Beatles and Marvel Comics? In the mid-to-late 1960s (especially the dawning years of the Groovy Age) the Fab Four (without using too much hyperbole) revolutionized rock and roll and the music industry. Marvel Comics, during that same time period (again, without too much hyperbole) revolutionized super-hero comics and the comicbook industry. During the 1970s Marvel became the top-selling comicbook company.

The twain did meet in the spring of 1978 when Marvel Super Special #4 hit the stands. Written by David Anthony Kraft with art by George Perez and Klaus Janson (with a stunning wrap-around cover by Tom Palmer), The Beatles Story is one of the most far-out, daring, and original comics of the entire Groovy Age. This "unauthorized biography" did a fine job of organizing the highlights of the Beatles tumultuous history, capturing the look, feel, and mood of each Beatles "era". You could tell this was a labor of love for Kraft, a former rock journalist who was a firm believer in the rock and roll/comicbook connection. George Perez was a natural choice for drawing the Fab Four as he had made a name for himself as a "group artist", having for a period of time drawn the Avengers, Fantastic Four, and the Inhumans simultaneously. On top of that, his ability to draw realistic likenesses was rarely given such free reign. Enough talk! Here it comes! It's one of Groove's Faves, and it's all right here for you, Groove-ophiles!

Thanks for the sensational support you've lavished 'pon DotGK for the past year-plus, Groove-ophiles! Keep telling your friends about us, and please keep those comments and requests comin'! Remember, this blog's for you!
Posted by The Groovy Agent at 12:02 AM 7 comments:

Ol' Groove can't let the month of November end without remembering the 40th anniversary of Neal Adams' triumphant turn on Detective Comics. Though he had previously drawn Batman teaming with other heroes in Brave and the Bold, Adams' first issue of Detective, issue #395 (November 1969), is the milestone issue in which he and writer Denny O'Neil first successfully shed the campy Batman image and re-introduced the world to The Batman. Here are the sensational splash-pages from Neal's legendary run. 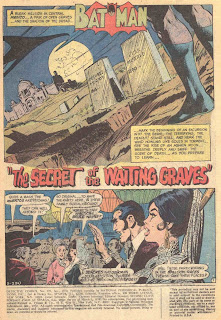 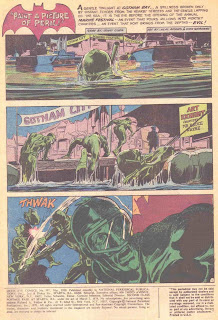 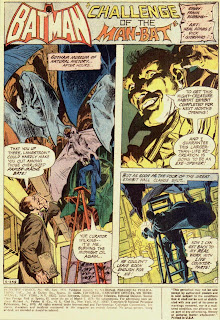 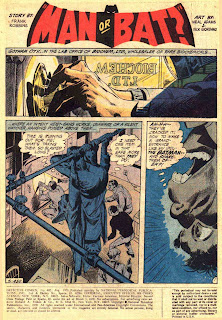 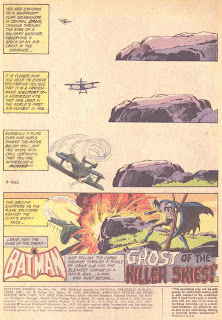 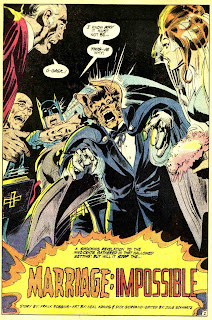 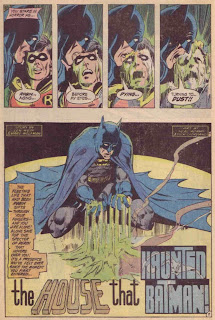 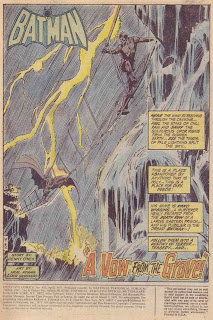 Salutations, stalwarts! Ol' Groove is back with another rapturous request! I've gotten a few requests here in Groove City to lay the scintillating second issue of Gold Key's The Owl (from 1968) upon ya. Ya kinda seem to have dug Jerry (Superman) Siegel and Tom Gill's campy/cool update of the classic Golden Age Batman rip-off, so let's see how you handle it when The Owl meets "The Terror Twins!" You'll view Mod villains! Gasp at Gangsters! Snicker at the Smooching! Root for the Robots! And Owl Girl's footwear will fracture your funnybone! You asked for it, here it comes!

Mark your calendar! Post #500 goes up Monday!
Posted by The Groovy Agent at 12:02 AM No comments: