Groovy Guest-Post: MAN-GOD: The Story That Was Almost Never Published!! 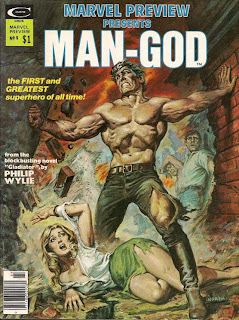 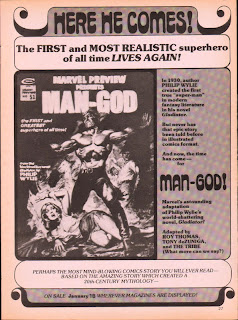 Dig it, Groove-ophiles! Here's a groovy Guest-Post by Mighty Michael Mikulovsky, comicbook fan and original art collector. He's got some Man-God memories to share with ya! Take it away, Mike!

Growing up in the 70s I always loved Marvel's great B & W mags. Around 1976 however the B & W magazine marketplace was kind of slim pickings. 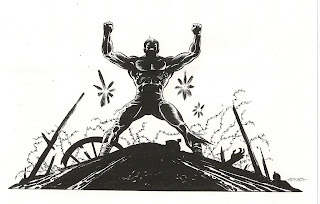 By this time all their awesome monster mags, Deadly Hands of Kung Fu, Planet of the Apes, etc. were pretty much canceled. (All way too soon in my opinion.) Well, one of the last of these mags, besides the Savage Sword of Conan, was Marvel Preview, which had different features every issue. In the winter of 77 we had the long delayed Man-God. I originally thought it was going to be a Kirby type story. Something on the take of the Eternals. Boy, was I wrong.

I had forgotten about it, because of the many delays before it was published for various reasons. One reason being that Rich Buckler was assigned to draw it, but he had to stop after only drawing the first 3 pages, due to either too many other assignments or the flu. He's credited as the artist, but the layouts on pages 4-51 are by John Buscema. The figure of Hugo Danner on the last page was done by Dan Adkins or Marie Severin. Tony DeZuniga actually finished the pencils over Buscema's layouts, though he was credited only as the inker. To top it off it was then lost in the mail for about 2-3 weeks, but the US postal service recovered it! So it was a small miracle it actually got published.

When I first saw the cover it really caught my eye. It was by one of my favorite magazine cover painters of the time, Earl Norem. It featured a very Samson like character, and reminded me of Victor Mature (who, ironically, played Samson in the movie version). It shows Hugo Danner in tattered clothes holding up two buildings in wha t looked to me like in the middle of the great San Francisco earth quake of 1912. The story of Man-God appeared in Marvel Preview magazine#9. It was adapted by the great Roy Thomas from the 1930 book Gladiator. It tells the tale of a Hugo Danner--a superman predating the Man of Steel by 8 years! (3 years if you count when Jerry Seigel & Joe Shuster created Superman.) Was it an influence on Superman? I say YES! But the origin of his super power is scientific, more like that of Captain America/ Steve Rogers.

A scientist/college professor in Indian Creek, Colorado, creates a formula based off the strength of insects. Injecting the family kitten named ironically, Samson, the cat gains super strength, then proceeds to go on rampage across the country side. To fill his great appetite, Samson starts killing cattle before being shot by farmers. The bullets bounce off Samson. Afraid he'll be found out, the prof poisons Samson. A short time later the prof finds out his very religious wife is pregnant. Well, of course you know the rest. He can't but help wonder, "What if my child could have these great powers? The great deeds he could perform to help & benefit mankind." After their son Hugo is born, his wife soon realizes her husband had injected her unborn child with his formula. She considered unholy, especially after seeing how Samson turned out.

Hugo's origin is pretty much Clark Kent's/ Superman's except he has a huge appetite. The story starts around 1885/1899 & goes through to the mid- late 30's. This adaptation by Roy only covers the first half to 2/3's of the novel. It jumps around a bit in a few flashbacks covering his various adventures from his boyhood, college days, boxer, sideshow strongman, pearl diver, & as a soldier in the French Foreign Legion in WWI. This issue's adaptation ends with the end of WWI. Sadly part II was never done. At least not yet! Hopefully, it will be one day! 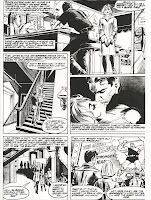 I've been lucky enough to collect 18 pages from this story so far (that's them, scattered throughout this post). I'm still looking for the remaining 32 pages by Tony DeZuniga. I hope someone out there might own some or know someone who owns any of these pages--or even just seen some at a website or at a comic con. I'd greatly appreciate any help in acquiring any more of these pages. Even if you do own some pages & are not interested in selling them, I'd still like to hear from you very much. Feel free to pass on my name & e-mail address. Thank you, Michael Mikulovsky. michaelwzeus@aol.com

Today is artist Tony DeZuniga's 68th birthday! Happy Birthday Tony! Thanks for all your years of beautiful artwork! All our best to you & your family. Here's to many more! Tony's latest masterpiece is a new 130 page Jonah Hex graphic novel.
Posted by The Groovy Agent at 12:02 AM