Groovy Christmas' Past: Captain Marvel gets "A Taste of Madness!" 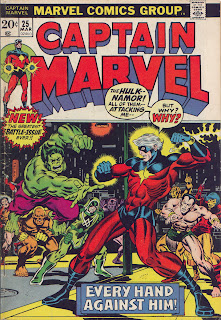 In December, 1972, Jim Starlin began his legendary run on Captain Marvel (issue 25), not only drawing the strip, but bringing over characters he'd created (Thanos and the Titans) during his short stint on Iron Man (issue #55, November, 1972). His melding of the art styles of Kirby, Ditko, Adams, and Smith made his star rise quickly. Soon he took over plotting, then the full writing chores on Captain Marvel (issue 29, August, 1973), and in the process not only saved the book from cancellation, but made it one of the most popular and influential comics of the early 1970s.

My admiration for Starlin and his talent knows no bounds. Young Groove was blown away first by Starlin's art, then by his writing on Captain Marvel. I followed him as he reached even greater heights with Adam Warlock, then Metamorphosis Odyssey, and Dreadstar. I was never disappointed, because everything Starlin did was a cosmic epic--my fave comicbook genre! (For more info on my love of Starlin's work, as well as the rest of his awe-inspiring career, check out my "Still Going" post from last summer. )

Nearly four decades worth of fans have and still are discovering the far-out worlds of Jim Starlin, but for me, it all started here. Inked by the talented Chic Stone, Starlin's power and promise comes shining through in this story written by the highly underrated Mike Friedrich.

Posted by The Groovy Agent at 8:38 AM