Holiday Tales: The Black Widow "...And to All a Good Night" 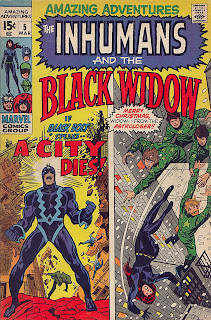 Before Birds of Prey. Before Buffy. Before the "bad girl" craze. Before Charlie's Angels...there was Natasha Romanoff, the Black Widow. 'Tash (as her friends called her) first appeared as an Iron Man villain way back in Tales of Suspense #52 (January, 1964). Later she became a love interest for Hawkeye and an agent of S.H.I.E.L.D., often appearing in the Avengers. By 1970, though, Women's Lib was going strong, and the Widow became Marvel's best shot at having a successful female character carrying her own series. The series ran from Amazing Adventures #1 (May, 1970) through issue 8 (June, 1971). After the series ended, Natasha partnered with Daredevil for a while (DD issues 81-117), then helped form, then led, the Champions (which ran for 17 issues from July, 1975-October, 1977). The Black Widow has been a Marvel Comics mainstay, usually appearing as a member of the Avengers.

This story, originally published in Amazing Adventures #5 (December, 1970), was also reprinted in the first Marvel Giant Super-Hero Holiday Grab Bag Treasury Special (December, 1974) where it became a sentimental favorite of Young Groove's. Written by Roy Thomas with art to die for from Gene Colan and Bill Everett, I think you're really gonna dig "...And to All a Good Night"!

Posted by The Groovy Agent at 6:33 AM