Bring on the Back-ups: "The World Within" by Wein and Weiss

What it is, Groove-ophiles! Let's kick off our next thousand-or-so posts with a classic back-up from the excellent creative team of Len Wein and Alan Weiss. It's the first episode of Pellucidar, "The World Within" from Korak #46 (February 1972). But first a bit of background...

When DC got the rights to Edgar Rice Burroughs' properties back in '72, they intended to get most all of ERB's popular characters in print. They started off with Tarzan and Korak in their own titles, with John Carter backing up Lord Greystoke and Korak getting both Carson of Venus and Pellucidar in his back pages. T'was a great time to be an ERB fan, what with talents like Joe Kubert, Marv Wolfman, Murphy Anderson, Len Wein, Frank Thorne, Mike Kaluta, and Alan Weiss behind those sensational strips. Check out David Innes and Abner Perry's maiden DC voyage right here! 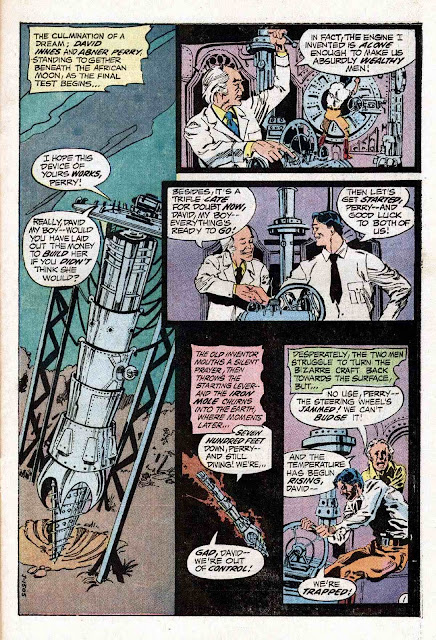 The fates are tricky things, though, and no sooner did DC get those first 52 page issues out to the spinner-racks then the powers-that-were decided to cut their page counts back to the standard 36 pagers, leaving John Carter and Pellucidar without homes. DC quickly packaged those fab back-ups into their own mag and called it Weird Worlds. We'll check out some of those classics in future posts. Pax!
Posted by The Groovy Agent at 12:02 AM