The Boys from Derby: "The Mystery of the Mali Ibex" by Pearson and Newton

Hey, hey, hey, Groove-ophiles! Here's an all-time fave amongst fans in the know--Bill Pearson and Don Newton's "The Mystery of the Mali Ibex" from Charlton's Phantom #70 (January 1976). Pearson's tale combines elements of some of Humphrey Bogart's greatest flix--The Maltese Falcon, Casablanca, African Queen, and Treasure of the Sierra Madre, allowing artist Don Newton to really work his artistic muscles by drawing many of the stars of those films, Bogie, Lauren Bacall, Sydney Greenstreet, Peter Lorre, and Claude Rains, into this rip-roaring adventure epic. Newton also manages to work in many of his own compadres. What I really dig is how Will Eisner's influence shows up in Newton's art--from the Greenstreet character's poses to The Phantom's sunglasses-and-suit "disguise". And on top of it all, Pearson colored and lettered the whole mag. These particular Boys from Derby were definitely firing on all cylinders! Dig it, baby! 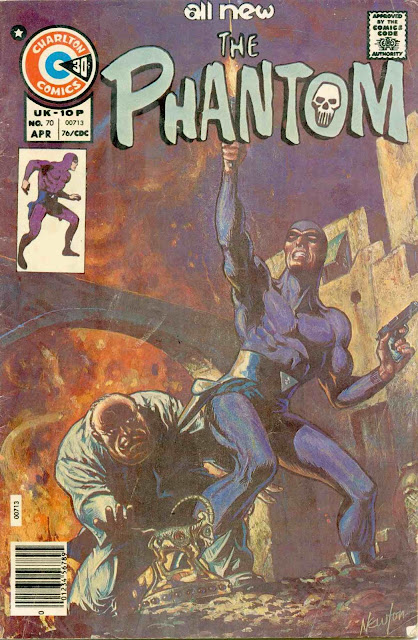