If You Blinked You Missed: Thongor, Warrior of Lost Lemuria 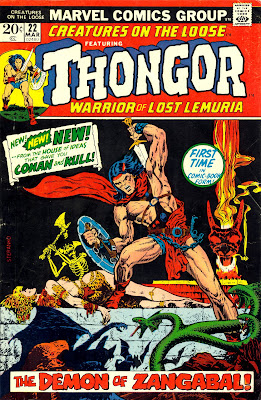 Greetings, Groove-ophiles! During the Groovy Age, due mainly to the success of Marvel's Conan the Barbarian comic, the spinner racks became filled with sword and sorcery characters. Some (like Dagar and the Warlord) were created especially for comics, while others (like Kull and Beowulf) were adapted from other sources. Marvel, DC, and even Gold Key threw their headbands into the blood and guts arena, but most of their efforts were short-lived. Case in point: Marvel's adaptation of Lin Carter's Thongor. 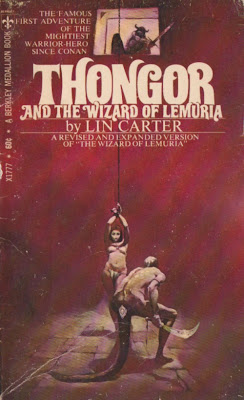 Thongor was a unique twist on Robert E. Howard's Conan as it combined Howard-style characters with and Edgar Rice Burroughs inspired world. Carter's character first appeared in the mid-60s during the ERB boom and appeared in a series of novels, as well as starring in several short-stories that popped up in a variety of fantasy anthologies. The coolest part of the history of Thongor? He could have been Marvel's premiere barbarian. S'truth! The story goes that writer Roy Thomas planned to get the rights to Thongor before he tried for the Conan license because he figured the Conan folks would want too much money. Thomas learned that he could get Conan for the same price as Thongor (though he offered more money out of embarrassment), so it was Conan, not Thongor, who became the star of Marvel's first and best-loved sword and sorcery mag. 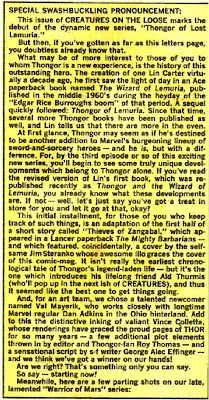 So, Marvel was having success with Conan, added Kull, and tried to add more S&S properties to their line-up. Creatures on the Loose seemed to be the "barbarian try-out mag" since Kull made his debut there with ish 10 (December 1970), followed by Gullivar Jones of Mars (December 1971), and finally Thongor with ish 22 (December 1972). (Hey--barbarians for Christmas three years in a row!) Thongor's strip lasted through CotL #29 (February 1974) with sci-fi writer George Alec Effinger writing the first four issues (with Tony Isabella helping out on ish 25), then Golden Age great Gardner Fox wrote issues 26-27 before the unique voice of Steve Gerber took over the wordsmithing with issues 28-29. The hugely talented then-newcomer Val Mayerick handled the art from issues 22-27, with Vincente Alcazar taking over for the last two issues.

It was a cool series, really. Unlike many of Marvel's experimental titles of the period, it had a pretty stable creative team--only 3 writers and two artists for an eight issue run, all of them turning out some pretty inspired work (with the exception of the colorist who gave Thongor black instead of red hair for the first few issues). I think Gerber was heading into some pretty trippy places, and I would've loved to have seen where he was going. Sadly, we'll never know.

What we do have are some great memories--and some far-out scans!--of the Warrior of Lost Lemuria, including his debut tale which Ol' Groove is gonna lay 'pon ya right now! Who loves ya, baby?