Black and White Wednesday: "Less Than Human" by Moench, Sienkiewicz, and McLeod

Say hey, Groove-ophiles! Star-Lord was probably the most popular of Marvel's "made for black and white" characters. His debut in Marvel Preview #4, by Steve Englehart and Steve Gan, was one of the most unique and dark super-hero origins of the Groovy Age. His next appearance in ish 11 is one of the single best comics, black and white or color, of all time, with Chris Claremont, John Byrn, and Terry Austin introducing us to Star-Lord's sidekick "Ship" and taking the character to a whole new level of science fiction and adventure. His next two appearances in MP #'s 14-15, still written by Claremont but with art by Carmine Infantino and Bob Wiacek, were forays into the closest thing to "hard science fiction" Marvel produced since the days of Unknown Worlds of Science Fiction. With MP #18 (Spring 1979) "More Than Human" we got yet another take on Star-Lord by a new creative team: Doug Moench, Bill Sienkiewicz, and Bob McLeod. This was a Star-Lord at another crossroads, facing another life-altering event. Moench's story, while not as expansive as Claremont's classic in issue 11, was pretty awesome, and the art by Sienkiewicz and McLeod was sheer heaven. We knew Bill could rock the dark world of Moon Knight, but now we learned he could "go cosmic". This is classic Groovy Age Marvel, baby. Take your time and savor this one! 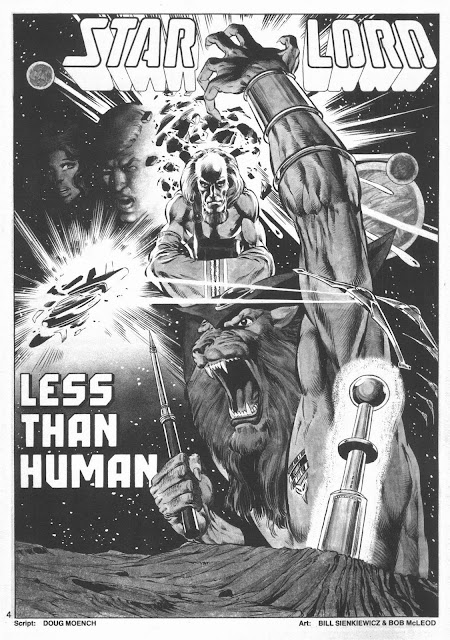