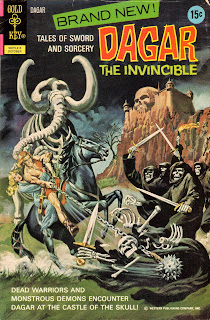 Marvel and DC weren't the only publishers who could put out cool sword and sorcery comics back in the Groovy Age. Gold Key, famous for (as my friends and I called 'em back then) "kiddie" comics (like Pink Panther, O.G. Whiz, the Disney comics, and all the rest) also put out Dagar the Invincible. Created by Don Glut (inspired by a couple one-off sword and sorcery shorts Glut had written for Mystery Comics Digest) with art by Jesse Santos, Dagar (pronounced "day-gar", though Glut intended it to be pronounced like the knife) was a far-out mish-mash of Prince Valiant, Viking Prince, the Mighty Thor, and Conan. Though combining elements of some of the all-time best fantasy comics, Dagar was also quite original and unique, due mostly to Glut's plots--which he used to create Gold Key's first (and last) shared universe, crossing them over with his other GK mags (Dr. Spektor, Tragg and the Sky Gods)--and his great care in crafting Dagar's savage world. That world was filled with demons, monsters, sorcerers, and beautiful women all brought to life by glorious art of Jesse Santos.

Check out a portion of this awesome interview with Don Glut (from swordandsorcery.org) on Dagar's origins:

"... Sword and sorcery was hot at the time, so I thought I'd try my hand at writing an S&S story. So I pitched a short story for Mystery Comics Digest featuring a hero called with the name "Daggar." It wasn't meant to be the start of a series. The editor bought it and the character was officially born. Then I wrote a second Daggar story for MCD, which the editor also bought. Then he called me up, and this is before either of the stories had yet seen print, and told me he thought an actual book featuring the character was a good idea. There were two problems. First, he didn't like the name. Second, there were still those two short stories that had yet to see publication. He didn't think it appropriate that those two short stories appear in the Digest after the debut of the actual book starring the character, and I saw his point.

"So, while he tinkered around with various other names for Daggar (including Zagar), he changed the name of the MCD hero to "Duroc" which later (because it rhymed with Turok) got changed again to "Durak" who I later had meet both Dagar and Dr. Spektor.

"At one point I wrote a synopsis for the origin story in which I called the character Shaark, a name that was also shot down. Finally, my editor called me up and said the series character would be spelled "Dagar". I kind of liked that because, as I was not yet certain that I'd get name credit in the book, "Dagar" contained both of my initials! By the way, the official title of the book (which I fought against) was TALES OF SWORD AND SORCERY. The Gold Key editors really liked those TALES OF titles. But almost everyone ended up calling the book DAGAR anyway. At last that's what I'd like to believe."

Ol' Groove believes this would be a great time to dig on Dagar's debut story. Here's Don Glut and Jesse Santos with "The Sword of Dagar!"

Dagar's comic (officially titled Tales of Sword and Sorcery DAGAR THE INVINCIBLE in the indicia) ran for 19 quarterly issues from July 1972 through August 1976 (a--very--few of those issues were reprints). That's four years, baby! That puts Dagar up there with Conan, Warlord, and a select few other sword and sorcery characters in the longevity department. Not bad for a guy who was originally conceived as a one-shot character!
Posted by The Groovy Agent at 12:02 AM