Mining for Gold(en): "I Now Pronounce You Batman and Wife!" 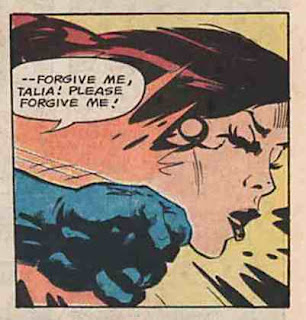 Michael Golden drew one of the best versions of the Batman ever, don'tcha think? The only problem is he didn't draw nearly enough Batman stories. The stories he did draw, though, were always special. Want proof? Here's a little-seen bit of Batman lore that is nearly forgotten but ranks high on the list of events that have greatly impacted the Darknight Detective's life. In the middle of the Batman Spectacular (DC Special Series #15) that blew us away in the torrid Summer of '78, there sits the ever-lovin' marriage of the Batman to Ra's al Gul's daughter Talia. Can you dig it? That new Robin running around in the Bat-titles, Damian? That's Batman and Talia's son. See why this story is so important? (I was tempted to do this as a "Secret Origins" featuring Damian post--aren't ya glad I didn't?)

One more bit of coolness before we get to the story: when he wrote this tale, writer Denny O'Neil (who, remember, helped create Ra's and Talia) actually considered it to be his Batman swan-song . Check out this quote (from Wizard Universe):

"There's a story I ended with Batman giving up," he recalls. "I think the last shot is of him in the daylight with his back to the reader having broken up with Talia. Of course I knew that Batman would be back next month, but I thought that I was probably done with the character, and that was my farewell to this thing I'd been involved with so long and intensely. And [editor] Julie [Schwartz] rewrote that caption to indicate this was not the end. But I thought that was the end of my Batman. Little did I know, it was just the beginning."

Of course ya know that O'Neil's association with the Gotham Goliath didn't end with "I Now Pronounce You Batman and Wife!". O'Neil would write a few more Batman stories (Detective Comics issues 480-491) before moving to Marvel (where he would edit, among other things, Frank Miller's Daredevil). It would only be a matter of time before O'Neil would find himself back at DC, and there he would spend about a decade-and-a-half guiding and editing the further adventures of the Batman and his co-horts (including Year One, Death In the Family, Knightfall, and many more memorable storylines).

But hey, we're here to celebrate Michael Golden's awesome Bat-artistry, aren't we? This time the Golden One is inked by one of the Batman's definitive inkers, Dick Giordano. Enjoy!