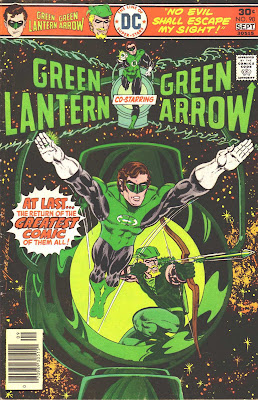 When it comes to Green Lantern/Green Arrow, the Denny O'Neil/Neal Adams era gets most of the attention, especially when discussing the Groovy Age. Ol' Groove has no problem with that, nope. The series with its "relevant" angle was ground-breaking, influential, and great comics all around. However, the much longer-lived revival, which began with issue #90 (May 1976) deserves some credit, too. This go-round concentrated on the sci-fi/super-heroic aspects of the Green Team, and did so very well, I might add. The majority of the Groovy Age stories were written by the same Denny O'Neil that had garnered GL/GA mass media attention five years earlier. The art was handled by (then) relative-newcomer Mike Grell, who'd been drawing the Green Lantern back-ups in the Flash and the Green Arrow/Black Canary back-ups in Action Comics.

Grell had already proven himself as DC's top sci-fi/superhero guy on Superboy and the Legion of Super-Heroes, but he really outdid himself on the early issues of this GL/GA comeback. His space-scapes, ships and hardware, and action scenes are eye-poppingly awesome. You'll also enjoy his crowd scenes, where he creates some wild aliens and even sneaks in some semi-familiar characters. (Vulcan Green Lantern, anyone?) O'Neil's plot isn't all that original or earth-shattering, but it is lots of fun, plus it introduces a few elements that are, even to this day, coming into play in the tapestry of the Green Lantern Corps. (Just imagine! Before the multi-colored Lanterns there were gun Lanterns!)

The most important thing is that this issue kicked off our emerald clad hero's most successful Groovy Age run (a whopping 116 issues!). While many other writers and artists followed O'Neil and Grell on this particular run, few (if any) topped 'em! Check out "Those Who Worship Evil's Might!"