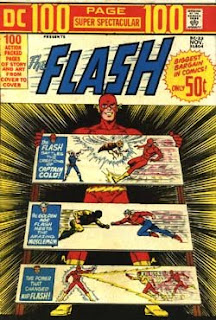 And the birthday hits just keep on comin'! This time, let's travel back to 1973, when Lil Groove was turning ten and knew how to handle getting comics for his birthday--find the biggest, most expensive one ya can, baby! This time, it was DC 100 Page Super-Spectacular #22 featuring the Flash, and it was a gasser!

Back then, the only way to get to read classic blasts from the past was with reprint comics, but there were tons of them back then (book reprints were scarce, usually paperbacks, and anything like the Essentials, DC Showcase, Archives, Masterworks, etc. that we have today hadn't been dreamed up yet). The best reprint mag going was DC's 100 Page Su 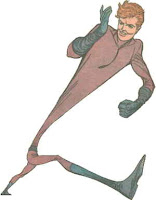 per Spectaculars (we called 'em Super-Specs). 100 pages (counting covers) of ad-free comics for fifty cents. Editor E. Nelson Bridwell was great at picking the best of the best from the 40s, 50s, and 60s, so every Super-Spec was a real treat.

Little did I know that this particular gem would mark a turning point. It was the last of ad-free issue, as well as the last to actually go under the Super Spec title; each succeeding 100 pager would be an extra-sized issue of an existing title, like Detective Comics, Justice League of America, Superman, etc. (If you're interested in more info on the Super Specs, visit Brian G. Philbin's awesome 100 Page Super-Spectacular Site!)

This issue had some really cool stuff in it. Besides such John Broome/Carmine Infantino goodness as the Flash teaming up with the Elongated Man to battle Captain Cold (from Flash #134) and "Secret of the Three Super-Weapons" (from Flash #135) in which Kid Flash got his unique gold/red costume, we got a sweet Elongated Man solo tale by Gardner Fox and Murphy Anderson (from Detective Comics #359) and a Golden Age Johnny Quick with amazing Mort Meskin art (from Adventure Comics #129). the biggest thrill of the issue, though, was the Golden Age Flash reprint by Gardner Fox and E.E. Hibbard (from All-Flash #13) "Campaign Against the Flash" in which the Flash mixed

it up with a baddie called the Djinn and a mystery man called (how's this for originality) Muscle Man! What was so cool was that it was a full-length Golden Age gasser (40 pages!) featuring the Flash's goofy side-kicks, Winky, Blinky, and Noddy (the DC Comics equivalent of the Three Stooges). The whole mag was tons-o-fun and a true birthday treat!
Posted by The Groovy Agent at 4:27 PM