Greetings, Groove-ophiles! Today Ol' Groove is gonna lay some high-quality science fiction on ya, so grab a zeta-beam, use the force, and full speed ahead warp factor 7! We're headed for Fredric Brown's "Arena"! 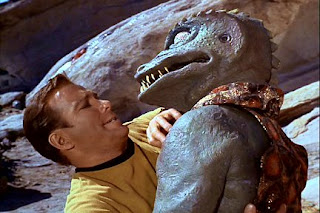 Cincinnati-born (just like Ol' Groove!) Fred Brown was a fave of other great writers like Mickey Spillane, Ayn Rand, Philip K. Dick, and Neil Gaiman, who wrote tons of sci-fi and mystery back during the Golden Age of sci-fi. His most popular work just might be "Arena", which he wrote for the June 1944 issue of Astounding magazine. The story has been reprinted dozens of times and adapted many times as well. Not only did Marvel Comics adapt it for their Worlds Unknown #4 (August 1973) the focus of today's post, but it inspired episodes of Star Trek ("Arena"), Outer Limits ("Fun and Games"), and Space: 1999 ("The Rules of Luton"). "Arena" was also voted one of the Top 20 science fiction stories written before 1965. And just 'cause Ol' Groove loves ya, baby, you can read Brown's actual prose tale here.

Mighty Marvel knew they were dealing with a classic and pulled out all the stops. Editor Roy Thomas handed the writing reins to his pal Gerry Conway (already a published sci-fi novelist at that time) and the art chores to the titanic team of John Buscema (layouts) and Dick Giordano (finished pencils/inks). He even got the future definitive X-Men letter and colorist, Tom Orzechowski and Glynis Wein to ply their talents. There were only two mis-steps, in Ol' Groove's opinion. They mis-spelled "Fredric" in the credits on page one (thankfully, they got it right on the cover! Whew!). The other boo-boo? Ol' Groove'll fill ya in on that one after you've savored today's masterpiece! Onward! 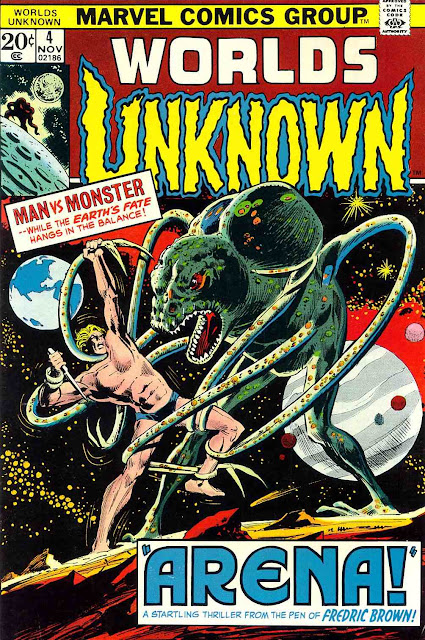 Marvel's other mistake was in their re-printing of "Arena" in their black and white Unknown Worlds of Science Fiction one-shot back in 1976. Naturally, Glynis' cool colors were gone, but the worst crime was that they re-lettered the story using rectangular word balloons and type-set letters in an effort to make the story look "more adult." Blecchh! Ah, well, nobody's perfect, Rascally One!
Posted by The Groovy Agent at 12:02 AM