What it is, Groove-ophiles! Ol' Groove's got a lot to hit ya with today, so let's get it on!

ITEM! You might notice that the Mind-blowing Blogs list looks a bit slimmer, now. Ol' Groove has decided to exorcise all the blogs that haven't updated since March, so if you're blog is missing, that's why. There are so many active blogs out there, I hate for them to get lost in the mix, so I hadda make a tough call. If you're blog is gone but you update it in the future, drop Ol' Groove a line and I'll put ya back in the list. Fair 'nuff?

ITEM! You might also notice a different list of blogs, "Gone but Too Groovy to be Forgotten". Those blogs either have shut down or haven't updated in quite some time, but are too full of important info and/or just too doggone great to get rid of. I thought giving their own little space would help cut back on confusion while allowing us to still access our old, never-to-be-forgotten faves.

ITEM! Ol' Groove has also kept adding blogs, as you no doubt notice. I mentioned Mike Vosburg's vozwords yesterday, and would like to point out a few more brain-blasting blogs today, if ya don't mind. 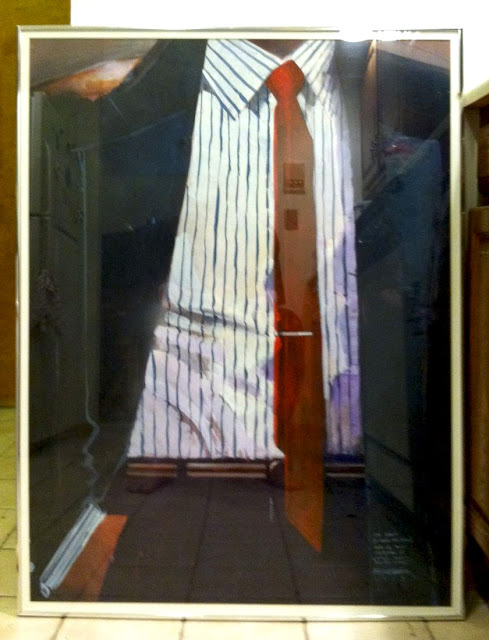 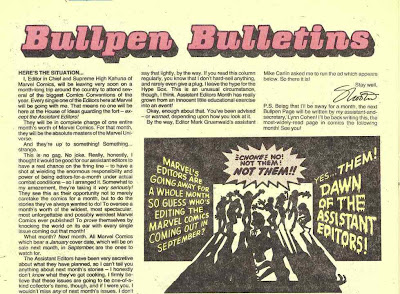 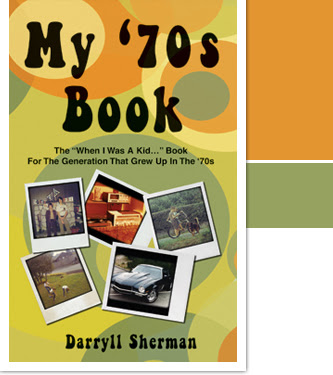 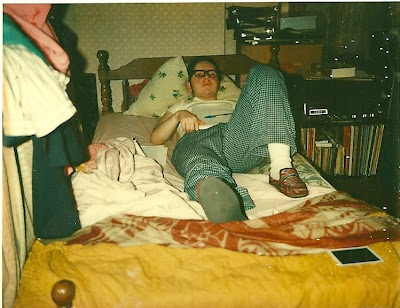 ITEM! You might notice that the sidebar sports the cover for Red Leaf Comics Daring Adventures #2 featuring my cosmic hero, Ultimus. Right now it's available as a digital copy for only ninety-nine cents. As soon as the link is up for the paper copy (which is at the printers and due out in about 30 days), I'll add that link as well. The link will also take you to a page where you can buy Daring Adventures #1, if ya haven't done so yet. Ol' Groove would certainly appreciate your support for Ultimus, and I'd love to hear what ya think of 'im! 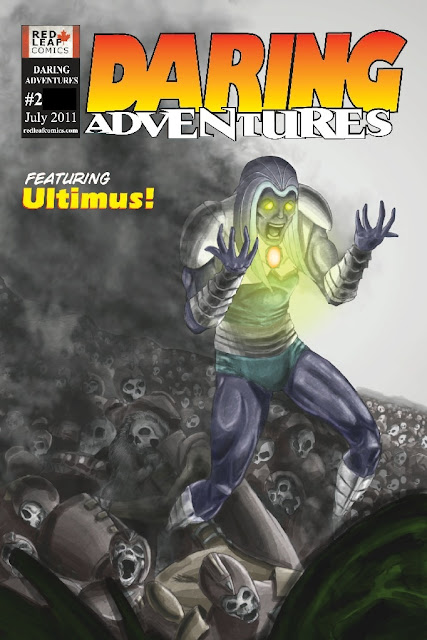 ITEM! And now, how 'bout some comics! This little-seen gem is from the back of Captain America #221 (February 1978) and was part of Marvel's program to help beat deadlines. It's a cool little "untold tales" story that stars perennial side-kick Rick Jones getting his shot at being a super-hero way back in 1964 (the story is set between issues 14 and 15 of the Avengers). Here's what author Scott Edelman had to say about "The Coming of Captain Avenger!"


We were encouraged, when writing brief stories to fit in the back of Marvel comics, to find cracks and crevices between storylines that could be filled in. Which is how “The Comic of Captain Avenger,” meant to take place between The Avengers #14 and #15, came about. So I was writing in 1978 about an event which supposedly took place back in 1965.


The five-page story, which starred Rick Jones and all of the mid-’60s Avengers fighting against Baron Zemo, was drawn by Steve Leialoha (penciller) and Al Gordon (inker).
(You can follow the link to the page Ol' Groove quoted here.) The tale is drawn by Steve Leialoha, best known for his inking skills on Warlock and Howard the Duck and inked by the underrated Al Gordon. Dig it, baby! 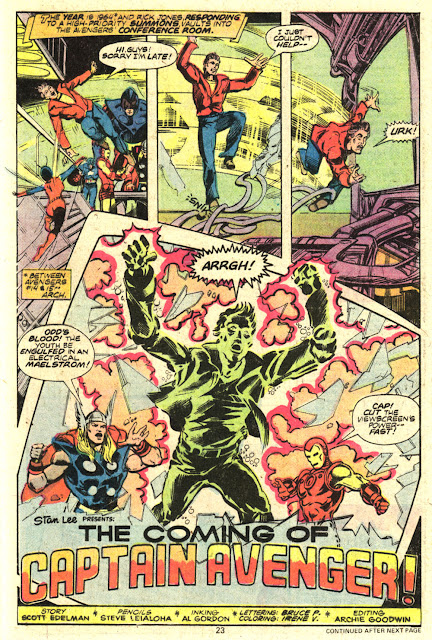 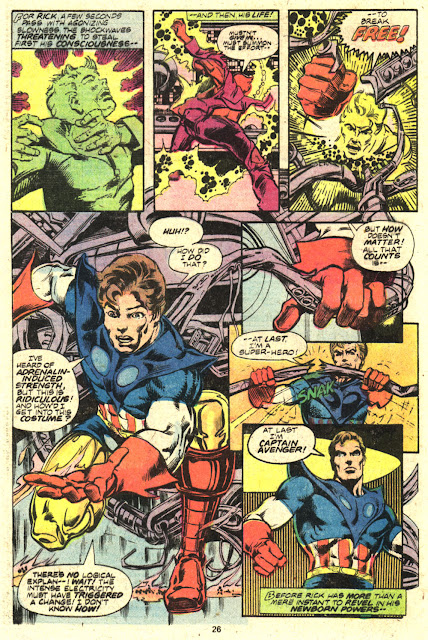 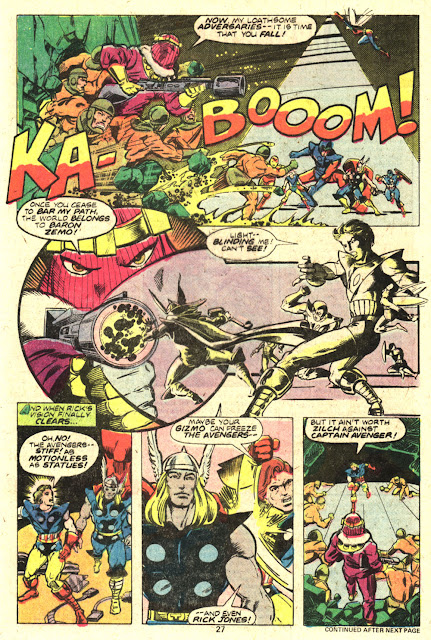 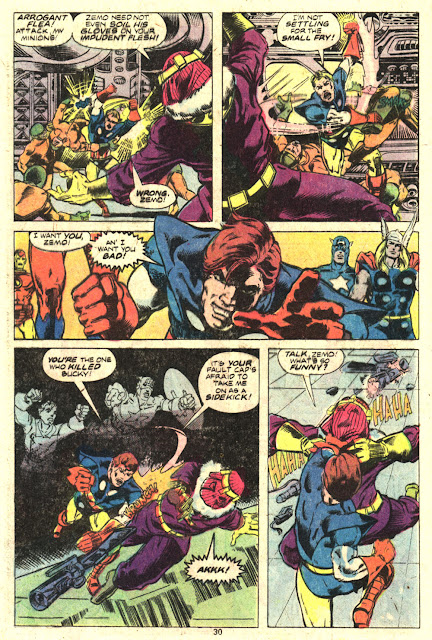 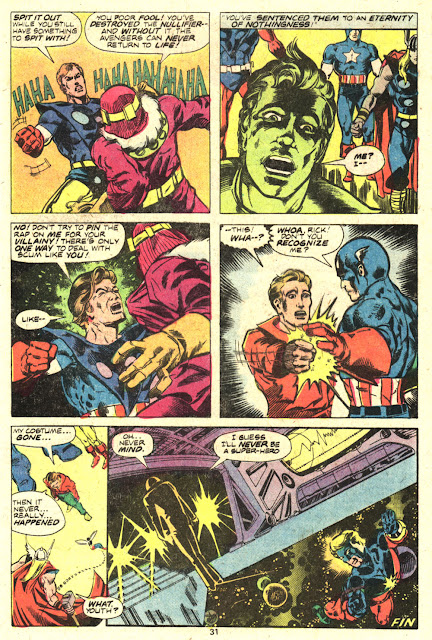