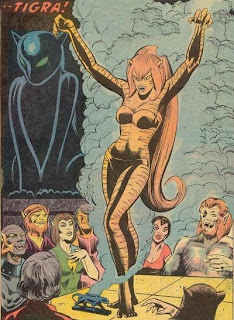 Once upon a time, there was a little girl named Greer Nelson. She became a super-heroine called the Cat, and performed very hazardous duties. But the Cat People took her away from all that. Now, she's a furry female. Her name is Tigra!

...rolls on with yet another Weird Hero, this time the fabulous femme formerly known as the Cat, none other than Greer Nelson, aka, Tigra the Were-Woman (yeah, we all know that really means "man-woman", but as a nameless armadillo explained in the letters page of Giant-Size Creatures #1 (April, 1974), "Yes, we know that the Germanic word 'were' actually means 'man'...

However, in everyday parlance, people have come to attach the prefix 'were-' to something when they want to indicated an element of lycanthropy--so we've no real fear of being misunderstood. But, for those linguistic experts out there in Marvelland, we just had to let you know that we do read things besides comic-mags." If they can live with it, so can Ol' Groove). Anywho, Tigra began her four color life as Greer Nelson, star of the short-lived Claws of the Cat mag (August, 1972-March, 1973) created by Roy Thomas, Linda Fite, Marie Severin, and Wally Wood (among others). The mag about a superheroic Women's Libber was a flop (that's what Tony Isabella called it in his article in G.S. Creatures #1), and the Cat was doomed to limbo.

But not for long. Tony Isabella, again, according to his article in G.S. Creatures #1, was trying to come up with a new super-heroine. He brainstormed first with Roy Thomas, then with Duffy Vohland and Gil Kane, came up with the idea for a character called "Hellcat", decided that character would be Greer Nelson's new identity, went back to Thomas who renamed the character "Tigra, the Were-Woman", teamed up with Werewolf By Night penciler Don Perlin, and viola! They dreamed up a team-up between werewolf and were-woman that would introduce Tigra to a waiting world.

The world must've not been ready, though, 'cause Tigra didn't appear again for another seven months. This time, plotted by Isabella, scripted by Chris Claremont, and drawn by Tony DeZuniga, Tigra was to be a regular star of Monsters Unleashed.

Then that mag was cancelled. One full year later, Isabella got another shot at making Tigra a star, this time beginning with the third issue of Marvel Chillers (November, 1975).

That lasted five issues. One issue more than her Cat mag, so I guess that's an improvement. During that time, she also teamed with the Thing in Marvel Two-In-One #19 (July, 1976). I suppose she and Blue Eyed Benjy made a bit of a connection, because her next appearance (post-Marvel Chillers) was in the pages of the Fantastic Four (issues 179-183, February, 1977-June, 1977). After that, Tigra teamed up with Spider-Man (Marvel Team-Up #67, December, 1977) and got another solo-shot in Marvel Premiere #42 (March, 1978). And that was it for Tigra during the Groovy Age.

She did become a regular member of the Avengers, and then Avengers West Coast during the 80s and 90s.

But why didn't a strip about a furry chick with cat-like powers, mixed up with a mystical secret society work? The world may never know. For my part, if Marvel had been able to keep artist Will Meugnoit on as regular artist (instead of grabbing whoever was walking by for three of those five issues), Tigra would probably still have her own mag today. That dude could draw the ladies, man! You don't have to take my word for it, check out the origin of Tigra by Isabella and Muegnoit from Marvel Chillers #3:

Ain't that art the cat's meow?
Posted by The Groovy Agent at 8:06 PM