WEREWOLF WEEK Gets Out of this World with Man-Wolf!

and Ol' Groove's just now getting around to yapping about him. Sorry, man (wolf)! I think you'll find it's been worth the wait, though. Can you dig what I'm sayin'? 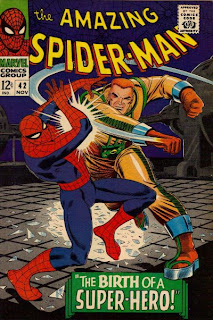 Let's go back to the beginning. John Jameson was a minor cast member of the Amazing Spider-Man's beginning with the first issue. Spidey rescued Jameson's out of control space capsule, earning Web-Head J.J.J.'s undying hatred. In Amazing Spider-Man #42 (by Smilin' Stan Lee and John "Ring-a-Ding" Romita, no less!), we learn that John had been on another, more successful space mission, but had come into contact with some kind of "space spore". Over the course of the issue, young Jameson is kidnapped by the Rhino and rescued by the Web-Slinging Wonder again. In the following ish, Jameson gets groggy and begins to grow taller and more muscular. NASA places him in a suit that will help him better control his new found super-strength. J.J.J. decides that his son should use his new powers to defeat Spidey once and for all, and winds up talking John into fighting our hero. Over the course of the battle, John becomes, in J.J.J.'s own words, "Cruel...deadly..!". Spidey eventually defeats Jameson by administering a huge electric shock, removing the powers caused by the "space spores". 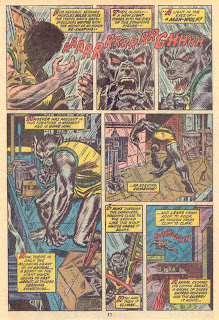 Evidently, Jameson the younger was a good astronaut, just a bit disaster prone. next time we meet him, in ASM #124 (July, 1973), he's gone through a few more...changes. And for some reason, he instinctively decides to find and kill his ever-lovin' pappy! Naturally, Spidey arrives on the scene just as Man-Wolf is about to get his paws on J.J.J., and we get a great Gil Kane penciled battle royal, during which J.J.J. somehow realizes that Man-Wolf is actually his space-trekkin' offspring. J.J.J. lets Man-Wolf get away, and Spidey goes looking for him...except our hirsute anti-hero finds ol' Web-Head first and it's cliff-hanger time!

In A.S.M. #125 (August, 1973, the ish in which the great Ross Andru debuts as Spidey's regular artist, by the by), Man-Wolf and Spidey tussle again, with MW giving Web-Head the slip once again. He crashes at his pad, where Jameson the elder finds him and gets the straight skinny on what's been going down that would turn a boy astronaut into a man-wolf. And here, in living color, is that fateful conversation courtesy author Gerry Conway and artist Ross Andru! 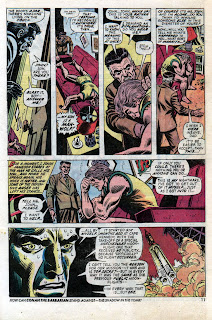 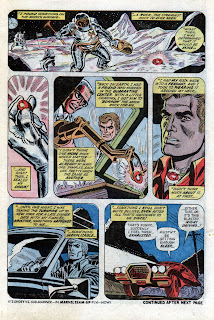 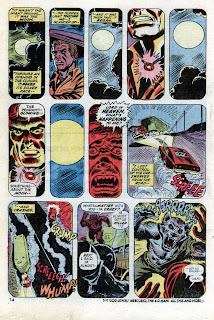 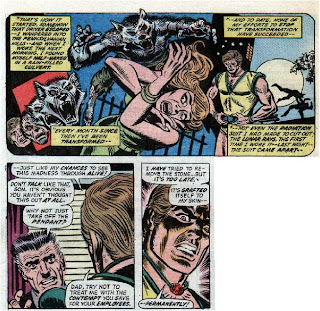 That choker-grafting-itself-to-his-skin-bit is probably why Ol' Groove never really got into wearing jewelry. Yeesh! Anyway, later that evening, John's fiance, Kristine Saunders decides to pay a visit--just as the change begins again! (Wouldn't you just know it?) Somehow, Kristine gets into her car just in time for Man-Wolf to spot her, and the chase is on! Luckily, Spidey is nearby and saves the day by ripping that pendant off Man-Wolf's hairy neck while they tussle, then tosses it in the drink. Should'a been a happy ending... 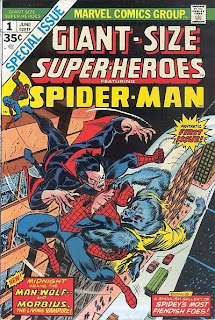 ...But when does that ever happen in comics? In Giant-Size Super-Heroes #1-and-only (March, 1974), John Jameson is captured by the Living Vampire, Morbius (more on him next week--promise!) who found his growl-giving-gem and reattaches it, causing Jameson to once again transform into the Man-Wolf. Once again, Jameson is the pawn of an avowed Spidey-hater and has to battle the wondrous Web-Slinger. By the story's end, it's clear that Jameson is destined to remain a Man-Wolf, thanks to Morbius' interference. 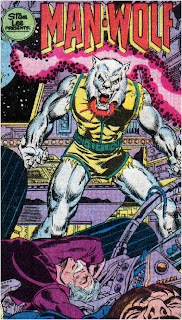 A short month later, John Jameson, aka Man-Wolf is given his own series in Creatures on the Loose, beginning with issue #30 (April, 1974). Man-Wolf's co-creator Conway must not have been available to script the series, so Marvel's resident werewolf expert (he was writing Werewolf By Night, remember, as well as yesterday's Solomon Kane vs. a werewolf classic), Doug Moench wrote the first two issues. The excellent, but ill-suited for a horror strip, George Tuska was signed on as penciler. Tony Isabella wrote issue #32, and the strip was struggling for a direction (nothing new for Marvel Mags of that particular time in the Groovy Age), and it looked like it was gonna be another case of musical creators. But then, some new guys, Dave Kraft and George Perez took over with ish 33 (October, 1974), and things immediately began to look up for hour hairy hero. The scripts and art were just a little rough around the edges, but you could see the energy and spark the new creative team brought to the strip, and man, it was exciting!

Kraft and Perez began mixing in fantasy and sci-fi elements, elements that were natural for a strip starring a gem-cursed werewolf, right? Things were really cookin' when...Creatures On the Loose was cancelled with issue #37 (July, 1975). As so often happened with minor Marvel mags back then, the plug was pulled just when things were really getting good. Here's a summary of Man-Wolf's CotL run, by none other than David Anthony Kraft, himself: (It'll be easier to read it if you click it, Irving!) 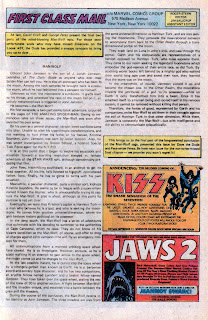 But, as Ol' Groove has often told you, Marvel never wasted a good character back in the Groovy Age. Nearly three and a half years later, in Marvel Premier #'s 45-46 (September-November, 1978), Kraft and Perez's masterpiece of science fantasy got a satisfying conclusion. We learned that the gem on Jamesons' choker was an extra-dimensional charm that would transform its wearer into the legendary Stargod, and while in the "Other Realm" Man-Wolf was no mindless beast, but the reincarnated Stargod, complete with the powers of telekinesis and energy manipulation. Plus, Perez got to cut loose with some Conan-meets-Star Wars type art, like this: 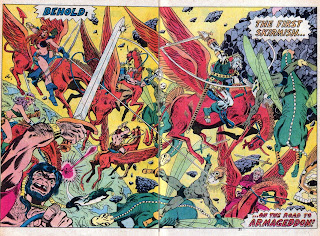 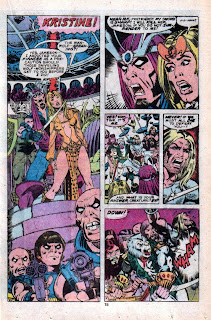 Man-Wolf saves the Other Realm from its evil, wannabe ruler, Harrysin Turk, and he and his lady, Kristine, return home for that happy ending we've been waiting for... 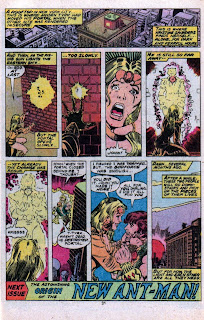 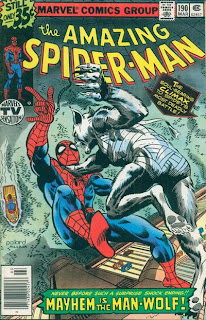 A bit later, in Amazing Spider-Man issues 189-190 (November-December, 1979), Jameson returned, once again out of control as the Man-Wolf, courtesy writer Marv Wolfman (why am I not surprised?) and artist John Byrne. We learned that the Godgem was slowly poisoning John, and he was once again captured and controlled by one of Spidey's enemies, this time a mad scientist named Spencer Smythe. As a helpless J.J.J. watched Spidey and Man-Wolf battle it out atop the Brooklyn Bridge, Smythe remotely triggered a device that caused Man-Wolf such agony that he seemingly slipped and fell to his death.

Post-Groovy Age, we learned that Man-Wolf wasn't dead, and he was finally cured of his lycanthropic tendencies. He went on to become a regular supporting character in the Marvel Universe, even enjoying a brief marriage to She-Hulk.

Personally, I think Marvel should have let Kraft and Perez continue Man-Wolf's saga their own way. It was so much cooler than any other take on the character. Oh, well.

Next: WEREWOLF WEEK concludes with a First Friday shocker! You don't wanna miss it, Groovester!
Posted by The Groovy Agent at 7:30 AM