Countdown to Halloween 2010! If You Blinked You Missed: The Legion of Monsters 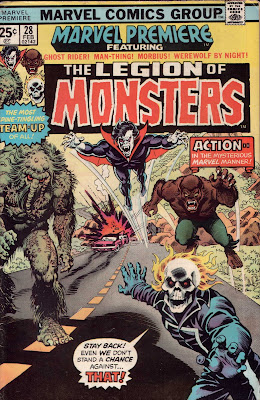 What it is, my Groovy Ghoulies! When you think of masters of the macabre, the names Bill Mantlo and Frank Robbins leap right to the top of the list, right? Now you're thinkin', "Has Ol' Groove lost his ever-lovin' mind?" Yeah, that's what I thought you'd think. Okay, while each of those talented titans did their share of monster mags, they're much better known for their work on other genres. Any other genre, in fact. Yet somehow fate (or was it just editor Marv Wolfman) who put this unlikely duo together (topped off with Steve Gan, no stranger to horror mags, as inker) to create this one-time-only super(natural)-team? What team? Ya gotta know by now that I'm rappin' 'bout The Legion of Monsters, baby! Of course, they weren't really a legion but a fearsome foursome of Marvel's mightiest macabre minions: Morbius, Man-Thing, Ghost Rider, and Werewolf By Night. Super-teams have always been popular, so I s'pose someone thought putting monsters together Avengers (or really, perhaps, Defenders) style had a shot at being a hit. 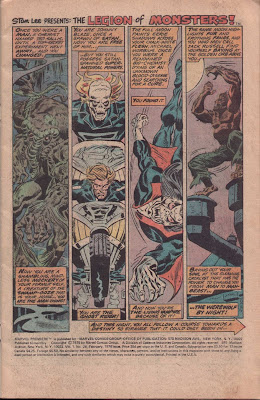 Still, Marvel liked the name and used it from time-to-time, usually to front horror mags for their black and white line.
Posted by The Groovy Agent at 12:02 AM