It's not often Ol' Groove has a Sunday to spend on the blog, but whenever I get the chance, I'll try to lay some far-out funny comics upon ya! Sound cool? Groovy! Well, what better way than to start with that sit-com family that (like it or not) pretty much defined the 70s for all time...

There were two issues of the Brady Bunch published by Dell Comics in late 1969/early 1970. Such tie-ins were nothing new, especially for Dell who seemed to specialize in movie and TV tie-ins--as we'll learn as this blog keeps travelin' on. You'd think that a comic based on Greg, Marcia, Peter, Jan, Bobby, and Cindy would've been a runaway success, but t'weren't so. In reality, the Brady Bunch wasn't the ratings blockbuster we'd normally associate with an iconic show. In fact, the show didn't catch on until ABC cancelled it and it went into syndication! But, as the man says, I digress...

For your viewing pleasure, here are the covers to those hard-to-find issues: 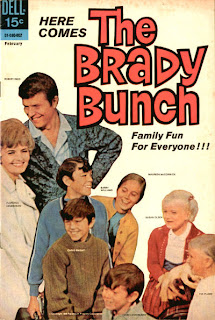 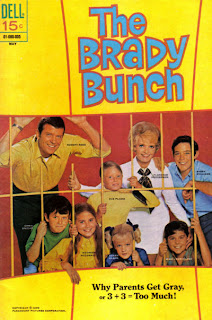 Aaand, thanks to the wonderful Brady World website, here is the debut story from issue #1:

Posted by The Groovy Agent at 2:33 PM