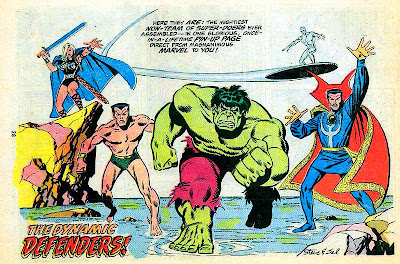 While he didn't receive the critical acclaim of his late brother, John, Silvio "Sal" Buscema was (and still is) one of comics' greatest artists. A master of storytelling, Sal's art crackled with energy reminiscent of Jack (King) Kirby, himself. His speed and dependability were legendary. If an artist missed a deadline, nine times out of ten, the job was saved by "Our Pal" Sal. Because of this, Sal probably drew every Marvel character during the Groovy Age, whether it be in Marvel Team-Up, Marvel Two-In-One, or their own mag.

Sal Buscema was one of the reasons Ol' Groove got hooked on comics. While Li'l Groove was picking up a comic here and there for most of his life, it was issues 88 and 89 of the Avengers that turned him onto the path of comicboo

k fiend (at least, that's what his family and friends called him). Those covers leapt out at me, grabbed me by the shirt and screamed, "Buy me!"--so I did. And from then on, I was never the same (hey--you just got the origin of the Groovy Agent--free of charge!). Soon, I found back issues (thanks to aunts and uncles with great taste in reading material) filled with Sal's work. He had been drawing Sub-Mariner, inking Silver Surfer and Conan, and supplying covers galore (even for comics he rarely drew, like Iron Man and Daredevil). Before long, Sal was the regular artist on Captain America, my second favorite title (Avengers being the favorite, natch). From then on there was no separating me from anything Sal had a hand in.

the Incredible Hulk, Skull the Slayer, Nova, Ms. Marvel, Spectacular Spider-Man, Tarzan, Rom: Spaceknight, and fill-ins galore. Though many times he was doing "breakdowns" (sparse layouts to indicate what was happening on the page to the "finisher" and/or inker), plus the fact that his style (especially when doing breakdowns) left him pretty much at the mercy of whomever was inking him, I could always depend on "Our Pal" to entertain me. Whether it was groundbreaking superhero drama (his work with Steve Englehart on Captain America), all-out superheroics (Avengers, Nova) or superhero insanity (literally!--meaning his run with Steve Gerber on the Defenders), Sal packed every page with drama, action, and fun. 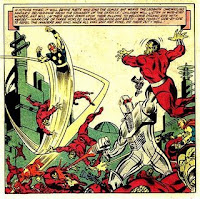 He still makes new fans and admirers even over two decades past the Groovy Age, mostly as an inker (on Spider-Girl). Sometimes, though, we get lucky and his powerful pencils pop up for a special story or cover. Mr. Buscemal has always stood for quality comics. Sal, we salute you, pal!!
Posted by The Groovy Agent at 4:49 PM