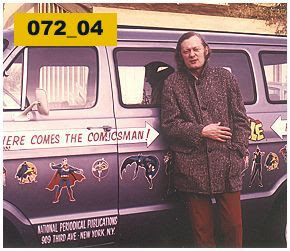 Back in 1973, DC Comics really got Young Groove's hopes up, then dashed them to the ground. They ran this "Behind the Scenes" piece that summer, claiming that the comicbook world was about to be revolutionized with the introduction of the "Comicmobile"--a mobile comics shop (okay, a van with a dude hawking comics, but still...)! Here, read it for yourself. I'll wait. 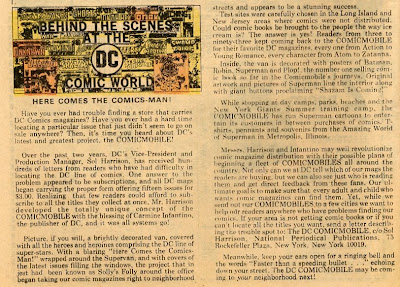 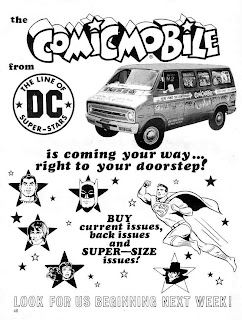 Didja catch that last line? "Meanwhile, keep your ears open for a ringing bell and the words 'Faster than a speeding bullet...' echoing down your street. The DC COMICMOBILE may be coming to your neighborhood next!" I spent days, DAYS, I tell ya, waiting outside, listening for that jive bell.

But it did exist. Despite what DC's hype page says, the Comicmobile was really the brainchild of the late comics entrepreneur, Bruce Hamilton (pictured at the top of this post). DC tried it out in select areas, decided it was too costly, and shelved the project. But they never mentioned that fact in their "Behind the Scenes" or even "Direct Currents" pages. 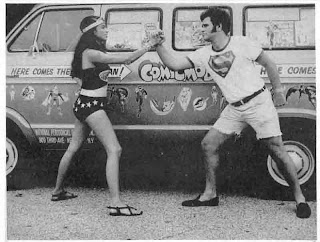 I had whole dollar saved up, DC. I had my running legs in shape (practiced chasing the Ice Cream Man, natch). I was ready, man, totally ready.

I'm still bummed out about that one.

You can read all about the Comicmobile from one of its actual drivers, Bob (the Answer Man) Rozakis right here. Me, I'm gonna pile a bunch of old comics in the back of my SUV and...naw, in this day and age, a grown man trying to sell comics out of his vehicle would just wind up in the slammer.
Posted by The Groovy Agent at 5:06 PM