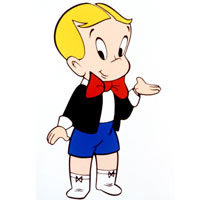 When Richie Rich first popped up in Little Dot #1 in 1953, Casper the Friendly Ghost was the shining star of the Harvey Comics heavens. I don't know what happened (I think it might've been the amazing art of Ernie Colon), but during the Groovy Age everyone seemed to start digging Richie Rich.

During the 1970s, RR headlined no fewer than two dozen comicbook titles! That's more titles than Superman, Batman, and Spidey combined had back then. That's almost as many titles that star the X-Men these days. It was mind-blowing, man! Here's just a sampling of Richie Rich comics circa 1975. 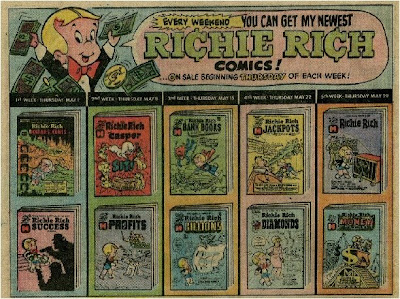 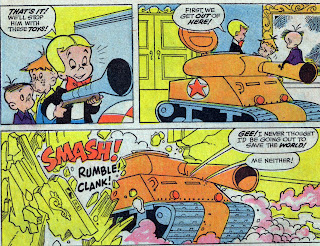 Thing is, even kids who weren't necessarily comics fans dug Richie Rich. I had cousins who wouldn't touch a Captain America or Green Lantern comic with a ten foot pole, but they had huge stacks of Richie Rich comics. Richie's super-power--endless loads of money--was a trip everyone could relate to. Not everyone can come from a distant planet or get bitten by a radioactive spider, but everyone likes to think they have a shot at getting wealthy. Of course, having your rich dad's scientists whip up a tank so you can help save the world isn't exactly realistic, it is, at least, in the realm of possibility. Suuure.

Kids no doubt also loved the fact that Richie had lots of cool adventures. My favorites were the ones in which he and his faithful butler, Cadbury, became the super-team of Crashman and Rippy. Y'know, like in this story from Richie Rich Bank Book$ #18, May, 1975! Enjoy, Groove-ophiles!