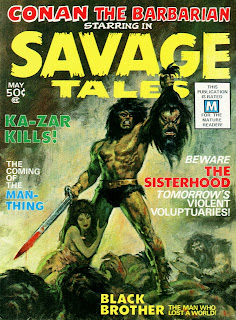 The only story I've never seen reprinted from Marvel's legendary Savage Tales #1 (February 1971) is Black Brother. Written by Denny O'Neil (under his nom de plume Sergius O'Shaugnessey), this story is part of O'Neil's "socially conscious" phase. While he was turning the comicbook world on its ear over at DC with his ground-breaking "relevant" work on Green Lantern/Green Arrow, he quietly slipped over to Marvel and wrote this story (to have been the first in a series) expressing his views on, as the editorial in the issue calls it, "...the awakening giant which is the New Africa, the Emerging Nations, the Third World." At first glance, one might think of Black Brother (especially due to that horrible title) as part of the then-popular "blaxploitation" movement, but that's until you read it. After you read it, though, you're still wondering, "What's it doing in a mag called Savage Tales?" Maybe O'Neil had some savage adventures in store for our hero after this set-up story. Maybe Editor Stan Lee just liked the story but had no where else to put such an adult piece. Here's a bit more insight from the editorial: "This tale may offend someone who's political education ended with Uncle Tom's Cabin. But it isn't designed to offend. Not anybody. It's simply a story--or at least, the beginning of a story--that we thought ought to be told. And to the best of our humble ability, it tells it like it is. The heroes are real because they are fallible. The villains live and breathe--because they don't really think they are villains at all, you see. But if each of them has God on its side--then who is left over to referee?" The fact is that Black Brother is there. And wonderfully illustrated by the team-supreme of Gene Colan and Tom Palmer, to boot. Dig it...