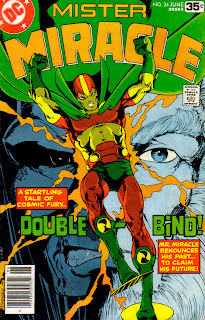 I have to say, though New Gods was my favorite of Jack Kirby's Fourth World titles, my favorite character was Scott Free, Mister Miracle. Here was a prince, raised as a slave/soldier, who both literally and figuratively broke the bonds of an evil society to become his own man. Evidently, a lot of fans had a soft spot for MM, because his book ran the longest of the Fourth World titles, clocking in at 18 issues (January 1971-November 1973) compared to New Gods and Forever People's 11 each. When DC brought New Gods and Mister Miracle back in 1977, I was delighted, but a bit wary since The King was back at Marvel. Who could pick up from where Jack Kirby left off?

Gerry Conway and the late, great Don Newton put forth a valiant effort on Return of the New Gods, but it lacked the scope, the "cosmic zap" that had made it so special. Mister Miracle, however fared much better. The first four issues of his revival (issues 19-22, June-November 1977) were written by Steve Englehart, who'd given us some "cosmic zaps" of his own on Marvel's Dr. Strange and Captain Marvel titles (though Englehart used his "John Harkness" pen-name on issue #22), and drawn by the incomparable Marshall Rogers. Englehart and Rogers managed to keep Kirby's father vs. son/good vs. evil/heaven vs. hell true to the spirit of what Kirby had done, but kept it fresh, exciting, and new. Believe it or not, though, t 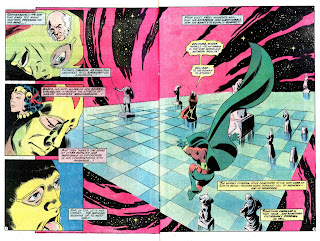 hings got even better when they left (and baby, that's high praise!). With issue #23 (January 1978), Steve Gerber and Michael Golden took over as writer and artist, respectively. Gerber had given us Nebulon and the Headmen in Defenders (posts on that are forthcoming, never fear!), Man- Thing, Omega the Unknown, Howard the Duck, and so much more. Yeah, the "cosmic zaps" would keep coming, but with huge doses of pop-psychology, satire, and cultural commentary to spice it up. And if any artist could pick up the baton and keep the pace with Marshall Rogers, it was Michael Golden (even if they did saddle him with the solid-but-too-old-fashioned Joe Giella as inker on his first outing). Gerber and Golden finished up what Englehart and Rogers had started, then with issue #24 (March 1978), they got their own thing going and gave Mister Miracle a whole new direction. No more standing in the middle of the war between Apokolips and New Genesis. Scott Free (along with his sidekick Oberon and his wife, the beauteous and bountiful Big Barda, natch) would take his super-escape artist act to Las Vegas in an effort to inspire mankind to escape from its humdrum routines and embrace their freedom and individuality so they would be able to survive the onslaught of Darkseid's anti-life equation should he ever wield it against them. Gerber and Golden's plan was to make Scott Free a "secular messiah", dig?

Sadly, Gerber and Golden's Mister Miracle lasted only one more issue (#25, June 1978), another victim of the dread DC Implosion. But man, it sure was far-out while it lasted!
Posted by The Groovy Agent at 12:02 AM