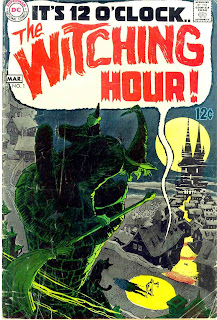 In November, 1968, editor Dick Giordano helped launch DC's coolest non-house mystery comic, The Witching Hour. I can remember seeing ads in other DC comics trumpeting The Witching Hour's arrival...and getting the creeps. (Hey, I was five! Gimme a break!) That first issue more than lived up to the spooky ads with its moody art by Nick Cardy, Alex Toth, Neal Adams, and others. And as with all other DC mystery comics, The Witching Hour needed a host; Giordano and company gave us three hostesses, inspired by the Weird Sisters from Shakespeare's Macbeth: Mordred, Mildred, and Cynthia. WH proved popular enough that it lasted 85 issues until it was absorbed into the Dollar Comic version of The Unexpected (starting with issue #189) during the DC Implosion of 1978.

It's 12 O'Clock...The Witching Hour! Time to see what Dick Giordano, Alex Toth, Denny O'Neil and Pat Boyette, Jack Sparling, and Neal Adams have in store for you...if you dare! 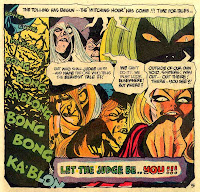 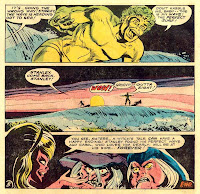