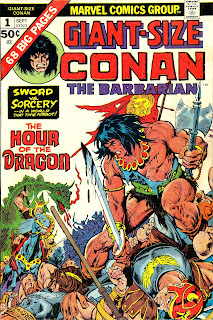 Greetings, Groove-ophiles! It's time for another mammoth post here in Groove City. Hang on and here goesssssss!

I think Giant-Size Conan was a dream come true for both Roy Thomas and Gil Kane, who'd planned on working together on Conan from day one, since, as the story goes, getting Marvel to adapt Robert E. Howard's best-known hero was Gil's idea to begin with. When Roy (then editor-in-chief) and Smilin' Stan decided to start publishing 68 page, quarterly companion comics, Giant-Size Conan was one of the first realized.

Since John Buscema had taken over the regular Conan mag and was drawing most issues of the b&w Savage Sword of Conan, the door was wide open for someone else to draw G-S Conan. It had to be Gil! To prove just how special the Thomas/Kane G-S Conan was, it was decided that the first six issues would be given to adapt REH's masterpiece, "Hour of the Dragon"! Inked by one of my favorite Kane inkers, Tom Sutton, Gil's love for both the character and the genre oozed from his pencil, jumped off the page, and punched Young Groove--and most all of Conan-dome, I'm sure--right in the kisser, baby! Roy, Gil, and Tom worked together on the first three issues, with Frank Springer replacing Tom on the fourth.

Sadly, the fifth issue of G-S Conan (like most of Marvel's G-S line by that time) was a reprint--and t'was also the final issue of that mag, so it fell to Roy and John Buscema to complete HotD in Savage Sword.

I've been patiently waiting for Dark Horse to reprint the color portions of "Hour of the Dragon", but they've moved way past it in their Chronicles of Conan series. Funny thing is that they've reprinted the finale from Savage Sword of Conan in their Savage Sword reprint series. What's up widdat? Some speculate that perhaps DH is saving HotD until the end of their reprint run with the idea that it can lead into reprinting King Conan. Perhaps. Whatever happens, when they do get around to reprinting the color portions of HotD you're gonna get your eyes full of some of the grooviest and most savage Gil Kane art ever. Just to whet your appetite (and/or hold you over), from Giant-Size Conan #1 (July 1974), here's "The Hour of the Dragon: Part 1"!