Bring On the Back-ups: The Short-But-Sweet Return of Tales of Asgard 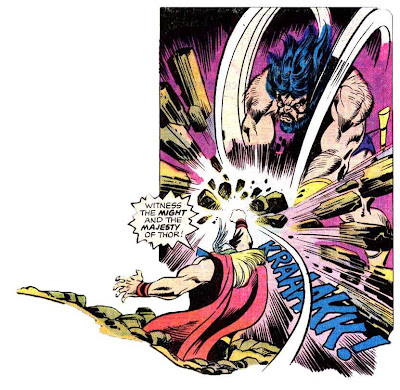 What it is, Groove-ophiles! Today we're gonna look at (just like the title says) the short-but-sweet return of Tales of Asgard. The world of the Mighty Thor had been explored in-depth during the end of the Silver Age/dawn of the Groovy Age to many a fan's delight in the back of Journey Into Mystery/Thor, but after Thor #145 (July 1967) the feature disappeared (save a couple of reprints). Luckily for today's post, nine years later somebody at Marvel got the bright idea to bring the fab feature back, if only for two issues. According to the splash page, Tales of Asgard, written by Dave Kraft with art by Pablo Marcos, returned to the pages of Thor for issues 252-253 (July-August 1976) because Marvel wanted to "Proudly present a two-part tribute to the most widely-acclaimed mythological mini-series of all time!" (Hey, was that the first time the term "mini-series" has been used to describe a comicbook feature?) Whatever the reason for its short-lived return (t'would be nice if Len Wein or DAK would fill us in, wouldn't it?), Young Groove flipped for this tale of Young Thor. The story was fun and I really dug the art...I was even inspired to try to do a younger version of one of my own original super-heroes, Space Knight (yes, this was years before ROM!), back during that halcyon summer--luckily for you, those pages have been lost to the ages. But scans of the Kraft/Marcos Tales of Asgard? Those I got for ya, baby! 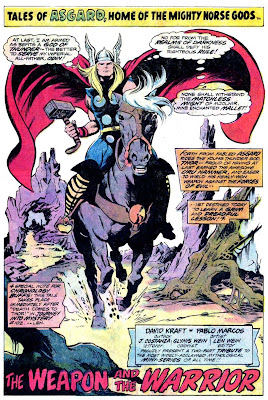