Random Reads: "Blood of the Twilight Reign" by Manhart and Nasser 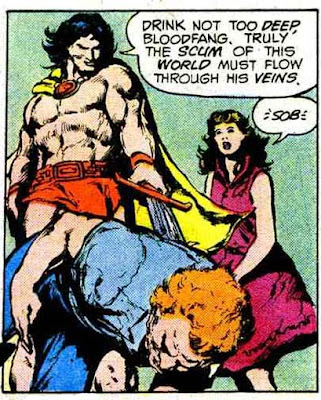 Greetings, Groove-ophiles! One thing Ol' Groove has always loved about anthology comics is the sheer variety you get for your hard-earned moolah. A lot of today's young'uns look at that like it's a bad thing, but it's not, baby, believe me! Take for example DC's mystery titles. You'd get at least a couple'a stories per issue, written and drawn by a mix of "old" faves and new faces. House of Mystery #276 (October 1979) is a perfect example of what I'm rappin' about. A cover by Mike Kaluta, stories and art by Joe Gill and Nestor Redondo, Len Wein and Steve Ditko, and the subjects of today's post Mark Manhart and Michael Netzer (aka Mike Nasser). A modern-day ghost story, a Gothic romance, and high fantasy--all for a mere forty cents! The great thing is that you had a three-in-one shot of getting a far-out read (in Ol' Groove's opinion, DC went three-for-three on this particular ish), so ya couldn't lose! My particular fave of the ish, as if you hadn't figured it out by now, is the Manhart/Netzer shocker, "Blood of the Twilight Reign". Netzer's art is really, really awesome on this outing. I mean, just dig that killer splash page! 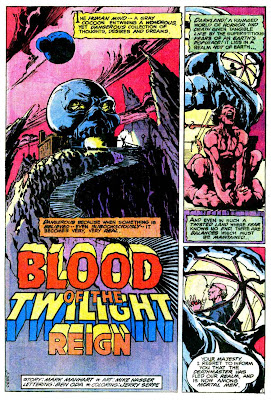