Remembering Don Newton and "The Phantom of 1776" 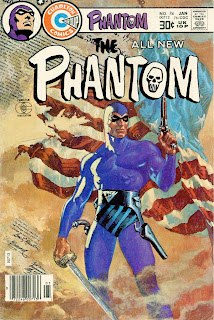 If he hadn't passed away in 1984, Don Newton would have turned 74 tomorrow. For those of you who don't remember him, Don was one of the absolute best artists of the Groovy Age, breaking in during the late 60s doing superlative art for a number of fanzines. Between 1974 and 1984, Don's pencils graced tons of strips for Charlton and DC, as well as a bit of work for Marvel here and there. Those who remember him still debate what his best work was (I don't think he ever turned out anything but the best, myself). Was it the Phantom? Batman? Aquaman? The New Gods? Shazam? For Ol' Groove's money, Newton was awe-inspiring on his Batman strips, but most of those came post-Groovy Age. And while his Groovy Age work on Aquaman, the New Gods, and Shazam was jaw-droppingly beautiful, it was his work on the Phantom (issues 67-68, 70-74) that really turns me on!

I could spend a lot of time delving into the life story of the uber-talented Mr. Newton, but there's a dy-no-mite website devoted to all things Don, so I'll just recommend that you visit that site if you're interested in learning more about a top-notch artist who left us far too soon. My goal is to allow his work to blow your mind, baby! In order to do that, place your peepers on what just may be Don Newton's masterpiece, from final issue of Charlton Comics' the Phantom, #74 (October, 1975): "The Phantom of 1776"!