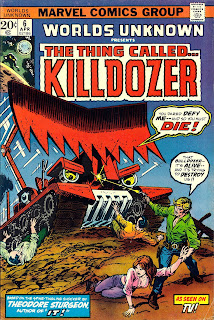 What's happening, Groove-ophiles? Welcome to the first-ever Diversions of the Groovy Kind Science Fiction Theater! Remember those Saturday afternoons or evenings spent in front of the old boob-tube watching old sci-fi/fantasy/horror movies hosted by some dude with a schlocky shtick telling really bad jokes before and after commercial breaks? If you do, then you know what Ol' Groove is up to here. If you don't, well, you're in for a treat, Grasshopper! The popcorn's popped, the tubes are warm, so have a seat and let's get started! 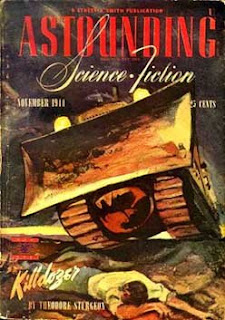 "Killdozer" was famed s.f. author Theodore Sturgeon's breakout story. Written in just 9 days, "Killdozer" was the only story Sturgeon, famous for his bouts of writers' block, produced between 1941 and 1945. It was first published in the November, 1944, issue of Astounding Science Fiction, then revised and reprinted in 1959's Aliens 4 collection.

In February, 1973, Marvel Comics started a new comicbook series called Worlds Unknown. The purpose of this series was to present adaptations of classic science fiction stories in comicbook form, similar to their fledgling Supernatural Thrillers which adapted classic horror stories. Worlds Unknown ran for 8 issues, ending in May, 1974. 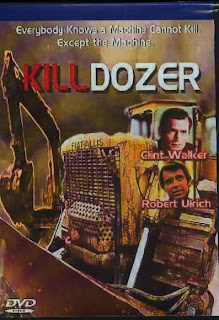 For some reason, in 1974, the big-wigs at ABC-TV thought that "Killdozer" would make a great movie for their fledgling Saturday Night Movie of the Week series. The movie first aired on February 2, 1974 and starred guys like Clint Walker, Neville Brand, and a young Robert Urich.

In January, 1974, Worlds Unknown Presents the Thing Called... Killdozer #6 hit the stands, complete with an "as seen on TV" blurb on the cover (which is kinda wonky since we wouldn't see "Killdozer" on TV until the second day of February!). It was fate. Karma. Kismet! The stars aligned way back then...so Ol' Groove could lay this post on ya today. Doesn't that make you feel all warm and fuzzy inside? Can you feel the positive vibes? Have you never been mellow? No? Well, then see how you feel after you've read...Killdozer (Written by Gerry Conway, art by Dick Ayers and Ernie Chan)!

Posted by The Groovy Agent at 9:00 AM