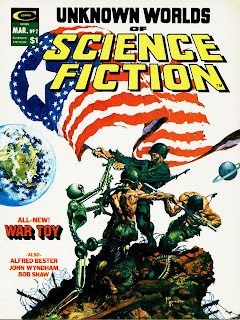 Once upon a time, in a galaxy that seems so far, far away, Marvel Comics was producing a wonderful line of black and white comic magazines. One of the best, though short lived, was stuck with a rather unwieldy title, Unknown Worlds of Science Fiction. The mag brought together many fine writers and artists from both the comicbook and science fiction fields creating brand new stories and sometimes adapting classics like Day of the Triffids; Repent Harlequin! Said the Ticktockman; Behold the Man; Adam...and No Eve; and many others. Sadly, it lasted only six issues (October, 1974-August, 1975), plus one special in 1976.

From time to time, Ol' Groove is gonna lay a classic comic from one of those magnificent mags upon ya--and today is such a day, you lucky Groove-ophile, you! I'm gonna start with a fave, "War Toy", by Tony Isabella and George Perez from U.W. of S.F. #2 (December, 1974). The story behind this story is pretty cool. Seems cover artist Mike Kaluta mentioned to editor Roy Thomas that he'd like to do a robot cover for U.W. of S.F. Thomas had been toying with the notion of a cover featuring an Iwo Jima style scene with a robot replacing one of the soldiers, so he gave Kaluta permission and the idea for the magnificent cover scene you see floating up there to your left. The cover was so cool, Thomas decided it had to have a story to go with it, so he gave Isabella (according to that issue's editorial) "the roughest of ideas" along with the title and turned him loose. The art chores were handed to a young up-and-comer named George Perez whose layouts pretty much blew everyone away. The only misstep was the art was heavily inked by the talented but overpowering Rico Rival. Still, the story is heart-rending, the art is far-out, and I really think you're gonna dig it!