Black and White Wednesday: The Hound of the Baskervilles Part 1 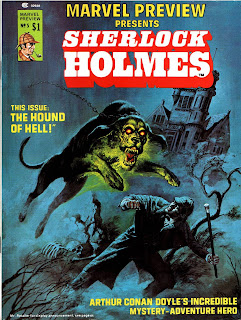 Greetings, Groove-ophiles! Have I ever mentioned how much I love Sherlock Holmes? Well, I do. Back in 1975, Marvel Comics actually had plans to publish an ongoing Sherlock Holmes black and white comic mag (and yep, around the same time DC was working on a color version--more of that in a future post!). For a variety of reasons, those plans fell through, but they did manage to put together a beautiful adaptation of Sir Arthur Conan Doyle's classic The Hound of the Baskervilles. Adapted by writer Doug Moench and artist Val Mayerik (with art assists by Dan Adkins, P. Craig Russell on part one; Tony DeZuniga inked and completed the art for part two), The Hound of the Baskervilles ran in two parts, issues 5 and 6, of the black and white try-out mag, Marvel Preview (Winter 1975-Spring 1976). Now, Moench took some liberties in translating The Hound into comics form to, according to Archie Goodwin's editorials (which I'm including in these posts), "...take advantage of working in a more visual medium...", but in Ol' Groove's opinion, the risks pay off. Heck, I like it so much I'm devoting two (count 'em!) two Black and White Wednesdays in a row to sharing this astounding adaptation wit'cha! That's gotta tell ya something, right? 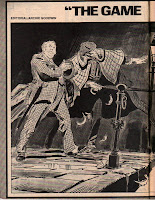 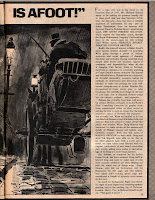 Be back next Wednesday for "The conclusion of the greatest adventure in the annals of Sir Arthur Conan Doyles' immortal master sleuth Sherlock Holmes"!
Posted by The Groovy Agent at 12:02 AM