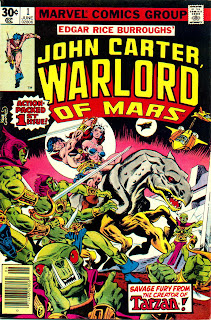 Before he created Tarzan of the Apes, Edgar Rice Burroughs wrote A Princess of Mars, featuring former Confederate soldier John Carter of Virginia and his otherworldly adventures. The book was serialized in All-Story Magazine in 1912 and led to Burroughs being able to make writing his vocation. Although overshadowed by the Lord of the Jungle, Carter and his adventures on Mars (called Barsoom by its natives) were and are quite popular, inspiring Burroughs to write an entire series devoted to his adventures. More importantly for today's post, Carter has appeared in comicbooks on and off since the Golden Age.

In Ol' Groove's eyes, Marvel's version, John Carter, Warlord of Mars, which made its debut in March, 1977, is hands-down the best of 'em all--especially the first 11 issues. Written by Marv Wolfman and drawn by Gil Kane, Marvel's version was the slickest, most awe-inspiring version of Barsoom ever to grace the spinner rack. The first ten issues ran an original (rather than adapted) serialized story called "Air Pirates of Mars", in which John Carter has to defend his Princess, Dejah Thoris, and her kingdom from a faction of Barsoomians who want both Carter and the Princess removed from power and/or dead.

Political intrigue, romance, action, swords, science fantasy, well-rounded characters, excellent dialogue, and action-packed artwork made JCWoM a "must-buy" on many of Groovy Age Marvelite's list. The first issue was especially beautiful, with Kane's pencils being inked by Dave Cockrum, who had left the X-Men and really wanted to help chronicle John Carter's adventures (he'd even created the character designs Kane would use), but was just not fast enough to keep up with a monthly book (X-Men had been bi-monthly--can you belive it?). What a team Kane and Cockrum were--oh, yeah, and Marv was no slouch, either.

Starting with the second issue, Kane only provided breakdowns, which were usually finished by Rudy Nebres, who's slick, expressive style gave Barsoom an appropriately otherworldly look. Issue #11 (January 1978) was another beaut, with Wolfman, Cockrum, and Nebres adapting (in only 17 pages!) A Princess of Mars. After that, Wolfman teamed with Carmine Infantino for a three parter, then a done-in-one story laid-out by Walt Simonson. With issue #16 (June 1978), X-Men writer Chris Claremont took over the writing chores and Ernie Colon took over as penciler. Frank Miller did one of his earliest Marvel jobs, filling in as penciler on issue #18 (August 1978), then Mike Vosberg took over the penciling reins with issue #22 (December 1978). Claremont and Vosberg stayed on until issue #27 (July 1979), leaving the final issue, #28 (August 1979), for the fill-in team of Peter Gillis and Larry Hama. Also noteable are the three JCWoM annuals (from 1977-1979) with nice work by folks like Wolfman, Claremont, Sal Buscema, Ernie Chan, Bill Mantlo, Alan Weiss, and Tony DeZuniga.
Posted by The Groovy Agent at 12:02 AM