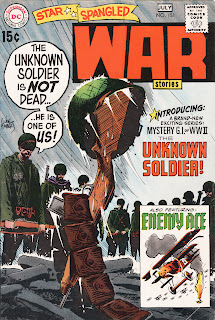 The Unknown Soldier, created by Bob Kanigher and Joe Kubert, first appeared as a guest character in a Sgt. Rock story (Our Army at War #168, March 1966) and promptly forgotten. Exactly four years later the Unknown Soldier took over the lead spot of Star Spangled War Stories with issue #151. Written and drawn by Kubert in his gritty, realistic, humanistic style, the Unknown Soldier was a smash-hit. He headlined every issue of SSWS from issue 151-204 (November 1976), when the title was re-named for its star and lasted another sixty-four issues before ending with issue #268 (July 1982). For twelve years, "the man no one knows--but-- is known by everyone" used his mastery of disguise (the only give-away to any of his disguises was his incessant need to scratch under his rubber masks) to battle the Nazis, save innocent civilians and Allied spies, and eventually assassinate Adolph Hitler (in his final issue). With top talent like Kubert, Kanigher, Bob Haney, Archie Goodwin, Frank Robbins, David Michelinie, Dick Ayers, Doug Wildey, Dan Spiegle, Jack Sparling, and Gerry Taloac chronicling his adventures, it was no wonder the Unknown Soldier lasted as long as he did.