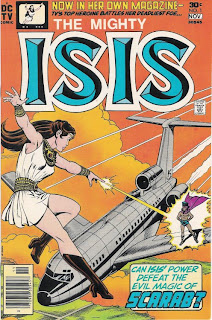 Mighty Isis! Joanna Cameron lit up CBS Saturday Mornings as Andrea Thomas, high school science teacher/Mighty Isis from 1975 to 1977, first as part of the Shazam/Isis Hour, then on her own in The Secrets of Isis. By 1976, Isis had appeared in the Shazam comicbook, then quickly spun into her own series. The TV series was limited by a low budget and strict censorship, so Isis didn't really get to show off the full extent of her powers. The comicbook had no such limitations (except the Comics Code, which was, believe it or not, much more liberal than the Saturday morning TV censors), which allowed Isis to display her various powers in bigger, more exciting situations. Just take for example the first issue, "Scarab: The Man Who Would Destroy" is by Denny O'Neil, Ric Estrada, and Wally Wood. It hit the spinner racks in July, 1976--and the Diversions blog today! Dig it, Groove-ophiles! 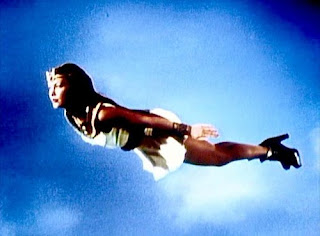 The comicbook series lasted eight issues, ending in September, 1978. The remaining seven issues were written by Steve Skeates (issues 2-3) and Jack C. Harris (issues 4-8) and drawn by Mike Vosberg. In the early 80s, an animated version of Isis appeared in CBS' Tarzan and the Super Seven.
Posted by The Groovy Agent at 12:02 AM