Black and White Wednesday: Worms of the Earth Part 1 by Thomas, Smith, and Conrad 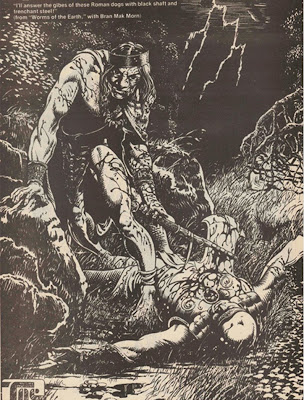 Many fans of Robert E. Howard point toward "Worms of the Earth" as the author from Cross Plains' best horror story, if not his best story period. It ranks pretty high on Ol' Groove's list of favorite REH tales, too. For many moons, author/editor Roy Thomas promised the tale, which he would adapt with Barry (pre-Windsor) Smith, would see publication in Savage Sword of Conan. It took longer than anticipated for the comicbook adaptation to be completed. What was to be Smith's comicbook swan-song instead became his unfinished symphony ten or so pages into the story. It took another visionary young artist, Tim Conrad, to pick up the artistic reins and complete the art side of the project.

Conrad, who's resume added up to about 15 pages of sequential comics and a fistful of pin-ups and spot illos, more than admirably stepped into the outgoing super-star artist's shoes. Finishing the pencils on a couple of Smith's pages and inking the whole story, Conrad blended his developing style with Smith's so smoothly that few readers noticed that the final five pages were pure Conrad. Most astounding of all was the magnificent air-brushed gray tones Conrad finished the project with, giving the highly-stylized art a stunning and solid air of realism. According to Thomas in the letters page of SSoC #19, Conrad's skill with the gray tones came from the artist having "...spent several hours watching black and white movies on TV!"

In Ol' Groove's eyes, the art on Marvel's adaptation of WotE is second only to Smith's "Red Nails" art from the early issues of Savage Tales. And seeing as how I believe "Red Nails" sports the most gorgeous comicbook art of all time...Well, I ain't gonna lay a hard sell on ya. I say it's a masterpiece. If you don't dig "Worms of the Earth"...better truck on down to your optometrist, and fast! Here it is: part one of REH's greatest Bran Mak Morn tale from Savage Sword of Conan #16 (November 1976)!

Next Wednesday: The cataclysmic conclusion of WotE! If you miss it you'll be so bummed!
Posted by The Groovy Agent at 12:02 AM