12 Days of Christmas: "The Seal Men's War on Santa Claus" 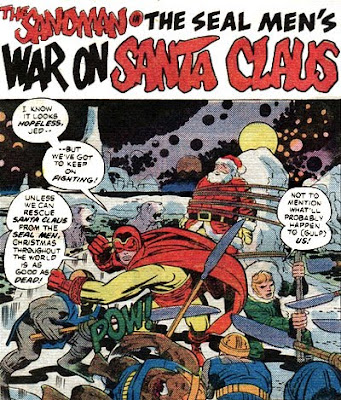 The big day is almost upon us, Groove-ophiles, and does Ol' Groove have an early Christmas gift for you! When you think of all the wild and wacky wonder of the Groovy Age, the names of Macabre Michael Fleisher and Jack "King" Kirby doth verily race to the top of the list. Put 'em together, and you have Groovy Age gold, baby! Their titanic team-up on the Groovy Age Sandman was a masterful mingling of funk, fantasy, weirdness, and whimsy and that ain't no jive! Ironically, the pinnacle of their aberrant alliance took about five years to finally see print. "The Seal Men's War on Santa Claus" was created for the never-published Sandman #7; never-published 'cause that magnificent mag was unceremoniously canceled with ish #6. The story did finally see print in the hard-to-find Christmas with the Superheroes in the Best of DC digest #22 (December 1981). In between those times, though, "The Seal Men's War on Santa Claus" appeared in the impossible-to-find Cancelled Comic Cavalcade #2 in 1978. Why? Because CCC #2 included the final two issues of Kamandi (#s 60-61), of course! Why are you scratching your heads like that? Oh, you're wondering what's Kamandi got to do with this whole sordid story? Well, y'see, Sandman was to have guest-starred in Kamandi #61 in a framing sequence that would have included, ta-dah! "The Seal Men's War on Santa Claus"! Got it now? Good!

I said all of that to say this: I really think you're gonna dig this Fleisher and Kirby dose of dy-no-mite delirium!