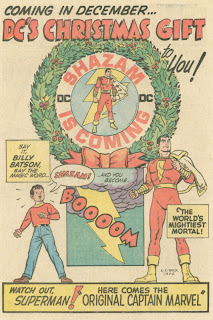 In the early 70s, nostalgia was big business. Summer of 42, American Graffiti, and similar films helped stoke that particular fire, and comicbooks were far from immune. Though sales didn't live up to expectations, fandom was abuzz when comicbook versions of pulp heroes The Shadow and Doc Savage hit the stands. Very few nostalgic revivals got fandom buzzing like DC's announcement that they would revive the original Captain Marvel--and said revival would be drawn by the good Captain's co-creator, Charles Clarence (better known as C.C.) Beck. 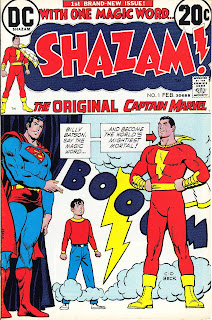 Editor Julie Schwartz, who had been so successful in reviving DC's own Golden Age heroes for the Silver Age was behind the new mag, which would be called Shazam! so as not to infringe on Marvel Comics (or their version of Captain Marvel who was at that time enjoying the spotlight in his own revived mag). DC's hottest editor, Denny O'Neil would write Shazam!, completing a creative team that represented the best of the 1940s, 1960s, and 1970s.

Young Groove had seen the above ad in Worlds Finest #215 (October 1972) and, you guessed it, flipped. See, Dear Ol' Dad had spoken many times of his favorite childhood superhero, yep, you guessed it again, Captain Marvel. DOD's reminiscences of Cap, the Marvel Family, the Savina's, Mr. Tawky Tawny, and the rest captivated Young Groove, and the thoughts of getting to see the Big Red Cheese in all-new action not only excited me, but kinda turned DOD on, as well. I didn't know how lucky I was on Christmas Eve 1972 to find an open drugstore with a copy of Shazam #1 on the spinner rack. I had no idea that speculators were hoarding copies by the dozen. I just knew that Shazam #1 was in my sweaty little palms. Now, to Young Groove, that first ish more than lived up to expectations. Schwartz and O'Neil managed to re-tell the origin of the Big Red Cheese and (most importantly) come up with a clever explanation for the Marvel Family's decades-long absence. Beck's art was just as clean and fun as DOD remembered, too! Just for giggles, how'd ya like a little taste of that fateful first issue? Here's Schwartz, O'Neil, and Beck with "The World's Wickedest Plan!" 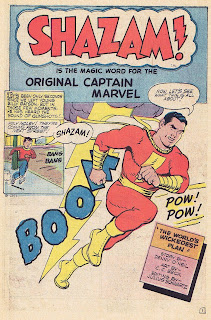 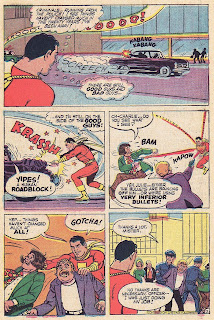 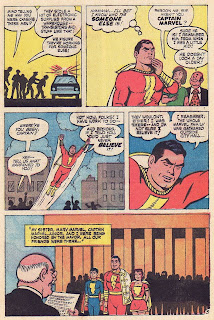 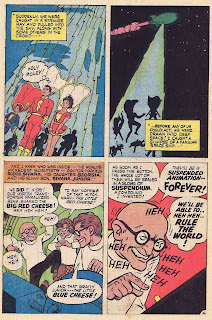 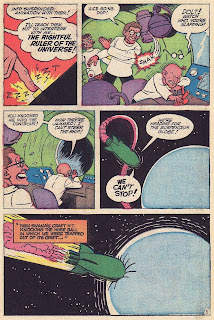 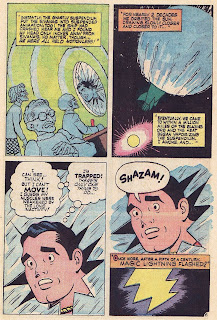 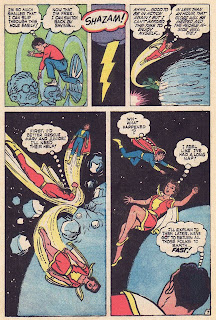 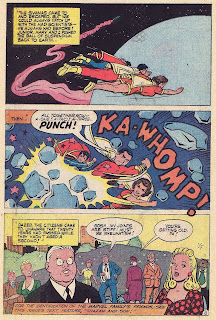 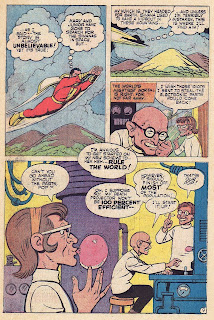 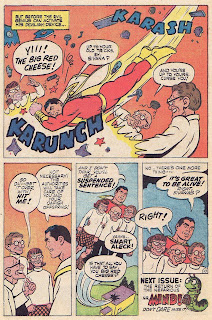 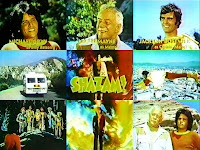 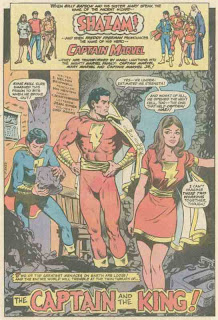 Pretty neat, huh? Sadly, Beck didn't stay long, nor did O'Neil. Other writers and artists (notably Elliot S! Maggin and former Golden Age Captain Marvel artist Kurt Schaffenberger) were soon writing and drawing the adventures of the Marvel Family, none ever really capturing the magic (no pun intended) of the original Golden Age series, but still turning out some fun comics. A CBS live-action Saturday morning TV show kept the comic alive for a few more years despite less than stellar sales. The "Shazam! Family" made some pretty interesting appearances in mags like Justice League of America and Superman vs. Shazam, but those stories seemed more responsible for driving home the "old fashioned" aspects of Captain Marvel, not to mention they made the Big Red Cheese and friends seem less like part of the DC Universe since they lived not on Earth-1 or even Earth-2, but "Earth-S". By 1978, artists like Alan Weiss and Don Newton were tapped to give the art a more "realistic" look but all of that happened just as the DC Implosion hit, sending the whole Marvel Family packing to the back pages of (ironically enough) World's Finest Comics (issues 253-282), where the strip would linger for the rest of the Groovy Age.
Posted by The Groovy Agent at 12:02 AM