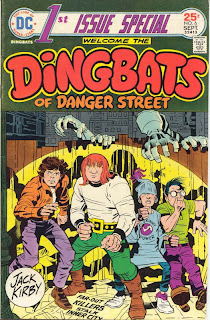 Most folks have never heard of the Dingbats of Danger Street, Jack Kirby's attempt to resurrect the "kid gang" concept he and former partner Joe Simon had pioneered and perfected during the Golden Age. Those who have heard of the Dingbats, whose first (and only) Groovy Age appearance was in First Issue Special #6 (June 1975) fall into one of two camps: they either love 'em or passionately despise 'em. There is no gray area. Why is that you ask? Many reasons. As I already noted, this was Kirby's attempt at bringing back the kid gang comics he'd done so well with back in the Golden Age (Boy Commandos, Newsboy Legion, Boys Ranch, etc.). He updated the idea with a group of kids who vaguely resembled Welcome Back, Kotter's Sweat Hogs but filled it with Golden Age style stereotypes. It's Kirby-humor unleashed, something we'd only really experienced during the Groovy Age in Not Brand Echh (unless you count a certain pair of Jimmy Olsen issues...). It's the twilight of Kirby's tenure at DC. And then there's, uhmmmmm... Let Ol' Groove lay it on ya straight, Groove-ophiles: there really is no way to explain the polarizing affect of the Dingbats. The Dingbats have to be experienced, sooo...