If You Blinked You Missed: Marvel's Color Doc Savage 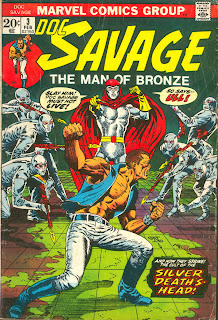 Hey, Groove-ophiles, have ya noticed that, in spite of the many times Ol' Groove has expressed his love for Doc Savage, I have yet to have done a post on Marvel's short-lived color version of the Man of Bronze? Well, Doc is on my mind more and more lately due to his upcoming return at DC Comics, so I got ta thunkin' that it's high time I rapped a bit about Marvel's color Doc mag.

I had seen the paperbacks at the local library, but when Young Groove laid eyes upon that John Buscema cover for Doc Savage #1 back in July of 1972, I was officially bitten by the Bronze bug! Steve Englehart was the writer for the first 4 issues (and plotted the fifth), and I was already diggin' his word-slinging on the Beast feature in Amazing Adventures, not to mention his just-out-of-the-gate, instant classic runs on Captain America and the Avengers, so I knew they'd be great to read. I'd been a fan of Ross Andru even before I knew his name, so Young Groove was ready for some good times. 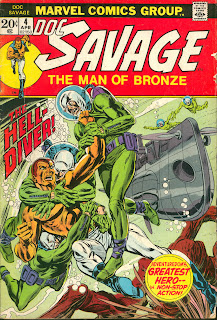 The first four issues were really far-out. In those first four issues, Englehart and Andru adapted (in two scant issues each--the one negative in the equation) both Man of Bronze and Death In Silver, two of the greatest Doc tales of all. After that, Gardner Fox, followed by Tony Isabella took over the writing reins. They both did a fine job, but the two-issues-per-novel approach was wearing thin on most fans, especially those who'd read the original pulp novels. The one constant was Ross Andru, who drew every issue except the final one, #8, (October 1973) which was penciled by Rich Buckler. A few years later, Marvel tried Doc again as a b&w magazine-sized comic with Dough Moench writing brand new adventures. It, too, lasted only 8 issues, but it was on a quarterly schedule so I'd say that was a bit better than the color comic fared.

For a change of pace, I'm not gonna post the first ish, or even the second. I'm gonna lay issues 3 and 4 (November 1972/January 1973) on ya, instead. Why? Well, first of all, I think Englehart knocked this adaptation of Death In Silver outta the park. Second, it showcases lots of Doc's cool gadgets and vehicles. And third, Andru's powerful pencils are inked by Tom Palmer, and let me tell ya, Groove-ophile--the team of Andru and Palmer is gonna knock you out!