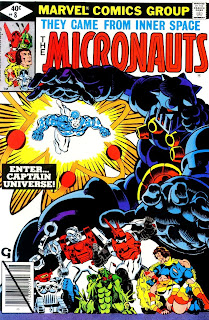 The Micronauts series produced by Bill Mantlo and Michael Golden for Marvel Comics is legendary, to put it mildly. One would think a licensed series based on a line of toys would be saddled with second-rate creators and/or consigned to the ho-hum section of comicbook history. Sometimes, though, the creators behind those toy-based comics get inspired beyond all understanding and create mags like Captain Action, ROM, and of course, the Micronauts. Micronauts #8 is not only a fine example of the utter magnificence of the work Mantlo and Golden produced on the series (just dig the incredible battle scenes Golden, ably abetted by inker Bob McLeod, gives us!), it also introduces a new and original character who would capture imaginations for years to come. Captain Universe was not a person, but a cosmic force that could be tapped into and wielded by humans in times of dire need. Definitely a unique and far-out concept, don'tcha think? Marvel hasn't overused the concept of Captain Universe to the point they've overused others (like Punisher and Wolverine for example), so when they have used it, it's been something pretty special. But Ol' Groove doubts anything'll ever top this...from May 1978, here's "Earth Wars!"