Let it be known, Groove-ophiles, that there was a time when comics actually had a competitor for my fanatical obsessions--Mattel's Hot Wheels. Li'l Groove was in the first grade, and digging comics a lot, but man, Hot Wheels were cool, too (sorry Matchbox fans), and my friends and I could collect, trade, and play with 'em. I had a white windbreaker covered with Hot Wheels decals that I proudly wore to school, and then--BAM!--I discovered that DC comics was producing a comicbook version (which tied into the TV cartoon version, which I also dug mucho--at least until the FTC had it taken off the air!)...and the die was cast, my fate was set, and all that other stuff that means I was hooked big-time! And when your favorite toy has a comicbook filled with art by masters like Alex Toth and Neal Adams...well, let's just say Ol' Groove still gets a kick out of the short-lived series (six issues from January-November 1970) based on my first favorite line of toys! Enjoy these splashes, baby! 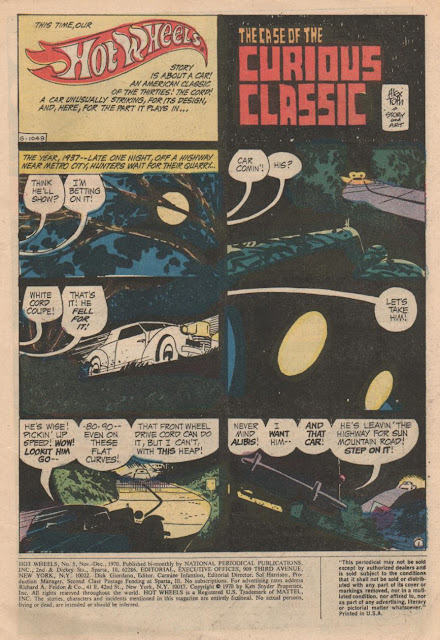 (Don't worry all you completests--we'll dig on Ric Estrada's back-up features later, man!)
Posted by The Groovy Agent at 12:02 AM