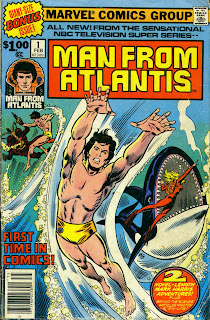 Question: what was the first American TV series to be shown in the People's Republic of China? Hint: it's the same show that made a star out of Patrick Duffy. The Bold and the Beautiful? Go stand in the corner. No, not Step by Step! Dallas? Aw, you're guessing. Look at the title of the post, ya turkey! Yeah, NBC-TV's Man from Atlantis. To be truthful, I watched Man from Atlantis, but I don't remember a whole lot about it. I do remember having to miss Sonny and Cher to watch some of the TV movies. Mark (the Man from Atlantis, duh!) Harris' webbed hands were kinda cool. Belinda Montgomery, who played Dr. Elizabeth Merrill was a cutie. Oh, and Victor Buono, who'd cracked me up as King Tut on the 1966 Batman TV series played the main villain, Dr. Schubert--he wasn't as funny, here. The folks behind MfA were going for science fiction more than laughs with this series. It was kinda cool, but it didn't last long. Several TV movies in early 1977, then a short-lived series in the 1977-78 season was all we got. Duffy made the jump to playing Bobby Ewing on Dallas and the rest, as they say, is history. Or is it...? 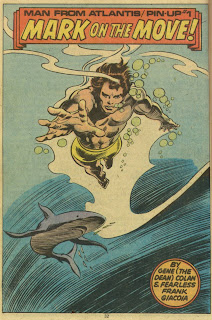 There is a little footnote in the saga of Mark Harris. A nearly-forgotten comicbook series produced by Marvel Comics called, oddly enough, Man from Atlantis! Marvel's MfA comic ran a staggering seven issues (November, 1977-May, 1978). Written by Bill Mantlo and drawn by Frank Robbins (except for the first story in the first issue), MfA the comic didn't exactly set the world on fire, either. I think the main thing that bugged me (and a whole lot of other Marvelites) was the fact that Marvel was doing a licensed comic about a man from Atlantis, while letting their very own, original Man from Atlantis, the Sub-Mariner languish in guest-appearances. Yeah, he was appearing regularly in the Invaders, but he didn't have a series of his own. And here's this Mark Harris-come-lately taking his place. 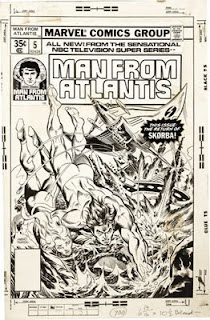 Except for the first issue, the series was pretty dull and forgettable, except for the covers. Now those were pretty sweet! We got John Buscema/Joe Sinnott on #1, Ernie Chan on #s 2 and 6, Alan Weiss on #3, Gil Kane/Tony DeZuniga on #4, Pablo Marcos on #5, and Carmine Infantino/Rudy Nebres on #7. Besides the covers, as I was saying, the best thing about the series was the debut issue. 80 pages (inspired by DC's Dollar Comics?) featuring two full-length stories and so many photos and so much behind-the-scenes info about the show, I don't even know why I'm writing this long-winded intro! I'm gonna step aside and let you have a look at the first issue (sans the second story, which my pal, Mighty Joe Bloke beat me to). Here's Ol' Groove's favorite story in the whole series, "Birthright" written by Bill Mantlo with art by Tom Sutton and Sonny Trinidad.

One more thing, Groove-ophiles! Today's the last day to vote for what you want my second blog to be about, so if you haven't voted, vote! You've got 'til midnight. I'll announce the winner on Monday!
Posted by The Groovy Agent at 12:02 AM