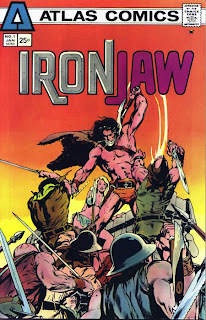 Greetings, Groove-ophiles, it's time for more Atlas-madness! As I've mentioned before, when the guys at Atlas/Seaboard had to rip-off a character or concept, they had an uncanny knack for making it seem original. For example, Iron Jaw. We all know Conan was a big hit for Marvel, so naturally A/S publisher Martin Goodman ordered his forces to come up with their own version of Robert E. Howard's iconic barbarian. So what did creators Michael (Spectre, Jonah Hex) Fleisher and Mike (Lomax, Vigilante) Sekowsky do? Stick their version of Conan in a post-apocalyptic future and saddle him with the name and shtick of an old Lev Gleason villain!
In Iron Jaw #2, Fleisher and Pablo Marcos (who took over the artistic reigns with this issue and kept them for the rest of the series) gave Iron Jaw a pretty twisted origin... 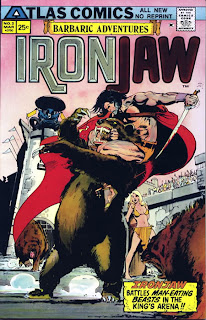 ...But didn't explain where the actual iron jaw came from. I don't think it really mattered to him, he just wanted to get on with the violence, baby! And get on with it he did, ramping it up as much as the Comics Code could withstand. So, naturally, not only was Iron Jaw handy with the sword, he liked to use that bear-trap of a mouth during a fight, as well! This was some of the cah-raaziest stuff to ever come from a color comic mag, lemme tell ya! Not only was Iron Jaw a ruthless brute in battle, he'd treat the women he'd rescue almost as badly as the dudes he was rescuing them from treated 'em. Rude, crude, and lewd--that was our hero! And yet...there was something in all that macho sweat and blood that held us spellbound, even if it was only for five short issues. 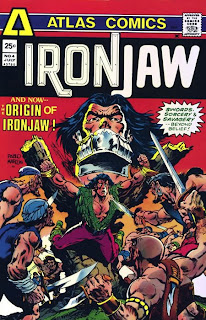 That's right! Besides starring in his own four-issue series (October, 1974-April, 1975), IJ also starred in a one-shot called The Barbarians (March, 1975), which came out between issues 3 and 4 of IJ. With his appearances in The Barbarians and Iron Jaw #4, our anti-hero seemed to soften a bit. He got a little more civilized. A check of the credits shows us why he changed--'cause, yep, you guessed it!--he got a new writer! As part of the "Marvel-ization" of Atlas, Martin Goodman took innovative editor Jeff Rovin's mags and gave 'em to Stan Lee's brother Larry Leiber to edit. Leiber replaced most every Atlas writer with Gary Friedrich, who's job was to make their mags more like Marvel's. So it was up to Groovy Gary to, not only civilize Iron Jaw a bit, but to give his iron jaw an origin.

And what an origin! Friedrich didn't hold back at all on the violence, cruelty, and even downright sexiness that had been a trademark of the strip. He revealed that the barbarian we'd been reading about had been raised as a peaceful minstrel, and...well, you just have'ta read it for yourself. It's a masterpiece of outrageousness (see how wild it was? I even had to make up a word for it...), to put it mildly.

Sadly, it seems there was more to the origin left to be told. What a bummer that Atlas/Seaboard never published Iron Jaw #5...
Posted by The Groovy Agent at 12:02 AM