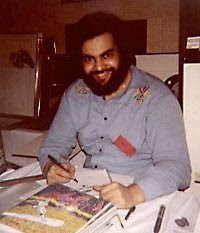 Greetings, Groove-ophiles! It's about time we took a look at the first published work of the amazing Mr. George Perez, don'tcha think? Mr. Perez's art has been wowing us for three-and-a-half decades on titles like the Avengers, Fantastic Four, Justice League of America, New Teen Titans, Crisis on Infinite Earths, Wonder Woman, Action Comics, Infinity Gauntlet, JLA/Avengers, Brave and the Bold, Final Crisis: Legion of Three Worlds, and so much more. But like everyone else, George had to start somewhere--and that somewhere was with a two-page filler in the back of Astonishing Tales #25 (the premiere of Deathlok--remember?) in May of 1974. Here's another look at the "real origin" of Deathlok, written by Doug Moench with art by Perez and Mike Esposito for all'a you with short memories.

But Ol' Groove ain't gonna stop there! We wanna see George's first, full-length comic, don't we? Well, buried deep within the yellowing pages of Monsters Unleashed #8 (August 1974), we find the treasure we're looking for--the final Gullivar Jones, Warrior of Mars* story! Titled "A Martian Genesis", this story wrapped up the Gullivar Jones saga that had begun in Creatures on the Loose #16 (December 1971).

Not bad for a start, huh? From there, George would do more black and white work most notably on Sons of the Tiger--where he helped co-create White Tiger-- in Deadly Hands of Kung Fu. He'd soon start his first series, Man-Wolf in (surprise!) Creatures on the Loose, beginning with ish #33 (October 1974). From there it was on to the Avengers and super-stardom. Of course, Perez would continue to grow and improve, his art would become more intricate and stylized, his storytelling skills would become among the best in comicbook history. We love ya, George! Especially those of us who knew ya "when"!

[*More on Gully in the future. Meantime, check this out!]
Posted by The Groovy Agent at 12:02 AM