Okay, so Marvel touted their Groovy Age romance comicbooks as the comics you buy for your favorite chick--so then why all the Charles Atlas ads, man? (Charlton and DC produced romance mags as well--with more female-friendly ads, and we'll get to 'em eventually--you've been forewarned!) But seriously, did'ja ever wonder what your favorite Marvel Bullpen superstars were doing when they weren't writing and drawing the adventures of Thor, Captain America, Spidey, or Daredevil? You really wanna know? Are you sure? You really, really wanna know? Okay, then, here's the answer, Groove-ophile! 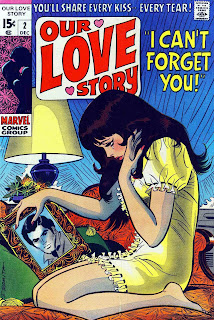 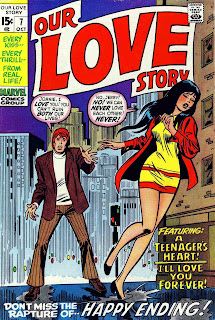 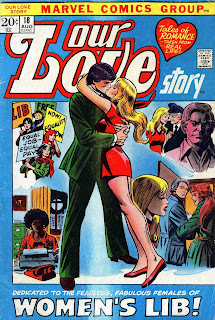 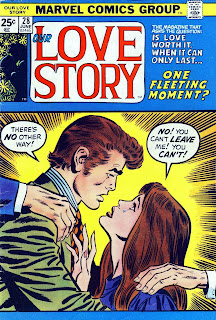 From Our Love Story #2 (September 1969), here's Stan Lee with the double-whammy team of John Buscema and John Romita with "I Love Him, But He's Hers!"

Next up, check out "A Fool About Love" by Holli Resnicoff (Stan's secretary/Mike Ploog's wife), Gene Colan, and Bill Everett from OLS #27 (November 1973)...

And finally, from OLS #28 (actually reprinting the story from OLS #15), here's a real twist--writer Steve Englehart's turn as a romance artist on "One Fleeting Moment--!", written by Gerry Conway and Holli Resnicoff...

Guess that's one way to while away time between Avengers/Defenders Wars and Secret Empire Sagas, huh, Groove-ophiles?
Posted by The Groovy Agent at 12:02 AM