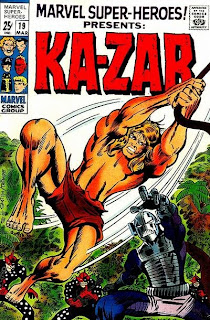 Who'da thunk it, Groove-ophiles? Back in 1968, Barry (Windsor) Smith was a struggling new artist, an obvious disciple of Jack Kirby. Interesting, quirky, but with a long way to go, as is quite evident by viewing his Ka-Zar cover (inked by Herb Trimpe) for Marvel Super-Heroes #19 (December 1968).

Fast forward to 1970/71. "Bashful Barry" was famously taking the world by storm on Conan the Barbarian, but he was also applying his mucho-improved penciling prowess--ironically, based on that cover--to the Lord of the Hidden Land in the pages of Astonishing Tales (issues 3-6, September 1970-March 1971). What a difference a couple of years made!

As they did in Conan, Marvel tried pairing a variety inkers with Smith's pencils over the course of this short Astonishing Tales run: Sam Grainger, Frank Giacoia, and Bill Everett. Barry's pencils were very strong on these issues, his style really asserting itself, so the merry-go-round of inkers didn't hurt the quality of the art at all, in Ol' Groove's opinion. In fact, Giacoia (AT #5) meshed with Smith much better than he did on their Conan team-up (Conan #5, February 1971), Grainger's inks (AT 3-4) were on par with Sal Buscema's Conan efforts, and Bill Everett--well, Golden Age great Bill Everett really "got" Barry's pencils. I, for one, would have loved to have seen some Smith/Everett art on Conan. Have a look at their pairing from AT #6 (story by Gerry Conway) and see if you don't agree...

BLINDED ME WITH COMICS IS COMING THIS FRIDAY!
Posted by The Groovy Agent at 12:02 AM