If You Blinked You Missed: Skull the Slayer 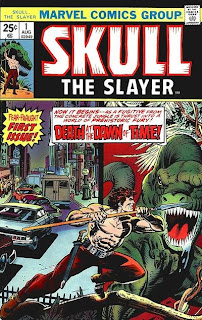 What's happening, Groove-ophiles? Man, I have'ta tell ya--I've been planning this particular post for a loooooooong time. I can't explain why (I guess I'll figure it out before the end of this post...), but I love Skull the Slayer. Maybe it's because it was the first comicbook series I ever got from first issue to last without missing an issue (a true accomplishment thanks to the spotty--and that's layin' it on ya gentle-like--distribution of the Groovy Age). Maybe it's because the concept of a group of strangers taking an airplane trip and crashing on an island with time-warps and dinosaurs is so freakin' cool (hey, wouldn't that make a great TV show?). Maybe it's because the star of the book, Jim Scully, is the bad mothah--shut my mouth--that guys like Wolverine and the Punisher would eventually become. Maybe it's because guys like Steve Gan and Sal Buscema turned out such mind-boggling art. Or maybe it's because of all of those things...and more...

Skull the Slayer was created by Marv Wolfman and Steve Gan, with mucho kibitzing from Roy Thomas, in 1975. Back in 1971, Wolfman had come up with the idea of thrusting an entire apartment building full of regular folks into a prehistoric jungle. I ain't jivin'! After coming to Marvel, Wolfman tried the idea out on Thomas who liked the general idea. Here's the whole behind-the-scenes story of Skull's creation by Marv, himself, from the first issue of Skull the Slayer (May 1975)...(That's it to your left.)

Around the time Skull the Slayer came out, Young Groove, as well as a whole lotta other dudes and chicks, were heavily into the whole time travelling, dinosaurs, the Bermuda Triangle, and aliens-as-gods-in-ancient-times scene, thanks to Planet of the Apes, Land of the Lost, Charles Berlitz, and Chariots of the Gods. Marv, Steve, and Roy tapped into that interest in creating the Skull mag. Ironically, at the same time at DC Comics, Mike Grell was taking the same inspirations, mixing them with Edgar Rice Burroughs, and created the better known and longer-lasting Warlord. Another one of those Marvel/DC coincidences, like Doom Patrol/X-Men and Swamp-Thing/Man-Thing, but I digress... Skull the Slayer also tapped into the real world of the 1970s, as well allowing Wolfman to develop an interesting cast of characters that would allow him to strut his stuff as one of the premiere purveyors of mature-yet-Code-approved comics, just as he did with his better-known and highly acclaimed Tomb of Dracula series. Scully was a Viet Nam vet who'd returned home only to be reviled by his country. He was a man born during the wrong time, perhaps inspired by Robert E. Howard's Esau Cairn. His supporting cast consisted of Jeff Turner,a run-away rich kid (a la Patty Hearst who'd recently been all over the headlines), an angry black physicist by the name of Dr. Raymond Cory, and his downtrodden liberated-lady assistant Ann Reynolds. Stereotypes? Yep, but stereotypes with their finger on the pulse of mid-1970s America. That little group mixed with cave men and dinosaurs made for a rockin' fun first ish, baby!

Wolfman and Gan were really clicking, and with ish #2 (August 1975), we learned that there were more than cave men and dinosaurs on Scully and crew's little island...

Which led to Skull getting an alien belt that gave him powers that he never fully understood or controlled...

I don't know if Wolfman had planned on giving Skull and his companions costumes, or if it was done to help sales, but I have to admit, they looked kinda decent! Ish #3 also introduced the Time Tower, a pretty far-out plot device that could lead to lots of interesting plots on down the road...

Sadly, now that he had everything set up for the series, ish #3 would be Wolfman's last. Here's the reason from that issue's letter's page: 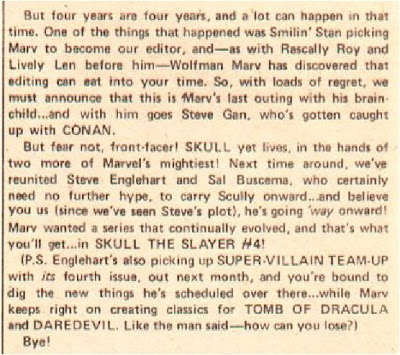 I have to admit, I wasn't a bit disappointed about Wolfman and Gan's departure when I learned that Steve Englehart and Sal Buscema would take over the writing and art chores. Englehart was one of my faves, thanks to his work on Captain America, Captain Marvel, and especially the Avengers (and Star-Lord, and the Beast, and...). And if you don't know by now that Ol' Groove has always been bonkers for Sal Buscema's art, go to the back of the class! So with great anticipation I waited for ish #4 to hit the stands in December, 1975. It started off with a bang...

Englehart killed off Skull's supporting cast, while making Scully look like a heartless so-and-so...and Young Groove was furious! How could Sterling Steve do such a thing? How could Marv (who was still editor, after all) let him? What the--??? Years later I'd learn that Englehart really didn't want to do Skull, didn't like the characters or concept, and jumped at the first-next mag to come available (Super-Villain Team-Up, which he did enjoy and did a fantastic job on and I will get to eventually). I guess even the grooviest of comicbook writers are allowed one mistake. The other thing that kinda bummed me out was the fact that Mike Esposito was inking Sal's layouts. Now Mighty Mike was a great inker, don't get me wrong, but he was all wrong for Skull's mag. Especially after being spoiled by the lush, exotic inks of Gan and Marcos, dig?

So along came issue #5 (February 1976), this time written by Bill (Micronauts, ROM) Mantlo. Mantlo very quickly got the strip back on track by bringing Jeff, Cory, and Ann back to life. Sonny Trinidad was tapped to finish Sal's layouts, giving the mag the exotic feel I'd come to love. Things were lookeeng goo-hood!

I was especially excited after reading Mantlo's thoughts on Skull in that issue's letters page... 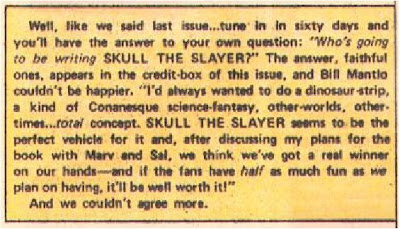 With Skull the Slayer #6 (April 1976), Mantlo and Wolfman kept their promise to get Skull back-to-the-basics finishing Englehart's plot threads and destroying the Time Tower. I kinda dug the Time Tower, but hey, if it meant Skull was gonna go back to fighting dinosaurs, as well as Tarzan-style lost civilizations, I wasn't gonna shed any tears!

Mantlo wrote a special editorial (replacing that issue's regular letter's page) to fill us in on the plans he and Sal had for upcoming issues. Another digression--this is the stuff that really hooked Ol' Groove on comics back in the 70s. Fan magazines were hard to lay your hands on, the Internet was science fiction, so when writers and/or editors spoke directly to us from the comicbook pages, man, that was far-out! Now back to Skull the Slayer... 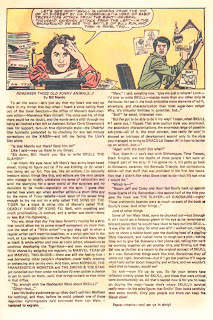 Ish #7 came out in June, 1976, and it was a doozy! The ERB-like lost civilizations and dinosaurs were back as promised! It looked like Skull was on the upswing for sure...

Then in August, 1976, ish #8 came out . The cover blurb gave us a hint of what we were in for: "This God Must Die!" Any time you saw something like "must die", "is this the end?", "final battle", etc. on a cover, that was Marvel-speak for "final issue", dig? I flipped to the letter's page (I always read the letters pages first!) and sure enough, my fears were right on... 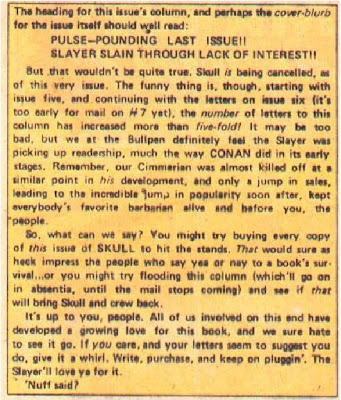 And the final page clinched it.

Sigh. It was fun while it lasted. (Well, except for ish #4...) Skull and his pals were relegated to that special place in comicbook eternity reserved for comics left with unresolved plots. 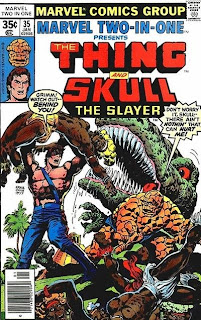 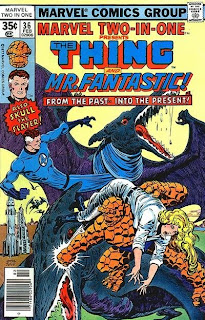 Funny thing about Marvel back in those days. More often than not, they'd remember those unfinished series and close 'em out in another title. And so it was one year and two months later that Skull, Ann, Cory, and Jeff were found by none other than the ever-lovin', blue-eyed Thing in Marvel Two-In-One #35 (October, 1977). Written by Skull co-creator Wolfman with art by the amazing Ernie Chan, bashful Benjy helped Scully and crew out of the mess they'd gotten themselves into back in Skull the Slayer #8. Then, in M2iO #36, with the help of Mr. Fantastic, Skull, the Thing, and company returned to the (then) present and rescued (then) President Jimmy Carter from certain doom, to boot. The FF promised to speak on Skull's behalf when he would go to trial for accidentally killing his brother (remember StS #1?) and his pals would go back to their old lives. Happy endings all around. A comicbook rarity if there ever was one, Groove-ophiles.