If You Blinked You Missed: Charlton Comics' Prankster 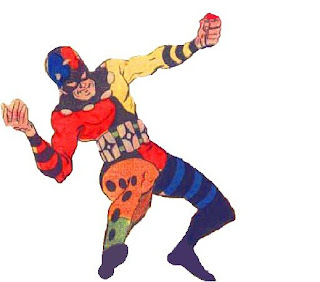 Created and written by Denny O'Neil (under the pseudonym of "Sergius O'Shaughnessy"--I guess Denny didn't want Stan Lee to know he was moonlighting) and illustrated by the magnificent Jim Aparo, the Prankster appeared only one time--as a back-up feature in the final issue of Charlton's Peter Cannon...Thunderbolt (#60, August/September 1967). The concept of a sci-fi superhero who's pledged to battle a "Big Brother"-like government that's pretty much outlawed all that makes us human (laughter, love, art, music...like the intro says) is pretty heady stuff--especially for the dawn of the Groovy Age, when Batman's camping it up on TV, Marvel's Galactus is the most challenging concept in comics so far, and Charlton is known as...well, as the comics you buy after you've bought everything else. 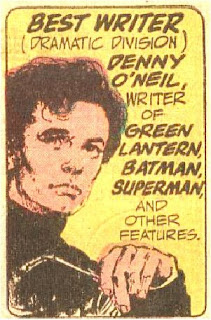 That O'Neil fella proved he had a lot to offer, didn't he, Groove-ophiles? It wouldn't be long before he'd drop his Marvel writing (on strips like Dr. Strange, Patsy and Heidi, and Millie the Model), stop moonlighting for Charlton, and head to DC Comics where he'd become part of a mini-revolution that would help push comics into more intellectual, important, and mainstream arenas. He would help return Batman back to his more serious "creature of the night" roots. He would help create "relevant" (or "socially conscious") comics in his legendary run on Green Lantern/Green Arrow (both usually in tandem with the equally legendary Neal Adams), winning loads of awards along the way. Denny would go on to become a highly successful comicbook editor, television writer, and a novelist, to boot. You'll be hearing a lot more about the talented Mister O'Neil both here and on my upcoming 80s blog, BLINDED ME WITH COMICS, Groove-ophiles! Peace!
Posted by The Groovy Agent at 12:02 AM