Admiring Adams: "Another Time, Another Place" 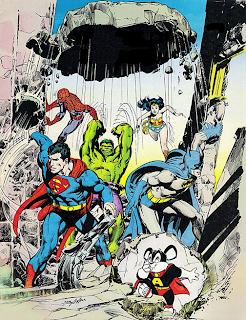 When folks ask me, "Groove, this Groovy Age thing--is it the Silver Age? Bronze Age? When did it begin?" I always answer, "Yes, to your first question, and with Neal Adams and Jim Steranko to your second question." While they're scratching their heads at my obviously obtuse answer, I explain: "The Groovy Age takes in the end of the Silver Age (around 1967) and the majority of the Bronze Age (until mid-1980). It's an organic thing you can't exactly pin down. It grew, it expanded, and it died a slow, lingering death. But it was vital, fun, and mind-blowing until the end." They still scratch their heads (as you might well be doing right now), and that's partly why I started this blog. It's a lot easier--and more fun--to show you what the Groovy Age is than to tell you. 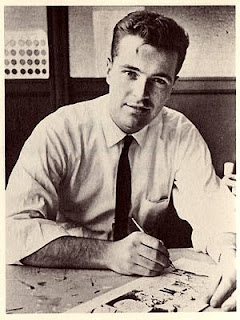 Why is Neal Adams such a catalyst in the origin of the Groovy Age? 'Cause when Adams came on the scene at DC drawing mags like Strange Adventures (Deadman) and Brave and the Bold, comicdom had never seen anything like him. He stood so far out (far out!) stylistically from every other comicbook artist, you could spot his work a mile away. He (along with Steranko) was like the Elvis of comicbooks. By melding styles and sensibilities from outside the mainstream, he seemed to create something new and exciting, irrevocably shaking up the status quo. You either loved him or hated him, but regardless, you noticed him, baby!

Pros and fans alike took notice. Comicbook art styles started changing from the simplicity and fluidity of Curt Swan or the in-your-face cartooniness of Jack Kirby to a more realistic, shadowy, raw, detailed style. Guys with their own individual styles, like Bob Brown and Irv Novick, had to adapt a more Adams-ish style when they drew Batman. New artists like Rich Buckler, Mike Nasser, and Bill Sienkiewicz pretty much started out as Adams clones, while others like Jim Aparo, Jim Starlin, and John Byrne blended the Adams influence with other influences and came up with unique new styles of their own.

I could rap all day on the greatness of Neal Adams. His work on Batman, the Inhumans, the X-Men, Deadman, the Avengers, Green Lantern/Green Arrow etc. is legendary, and rightfully so. But seeing is believing, Groove-ophile! Feast your eyes on this rare masterpiece from Our Army at War #240 (October, 1971) written by the irrepressible Bob Haney. It's a sci-fi follies of war parable simply titled, "Another Time, Another Place".